When Pirates of the Caribbean: The Curse of the Black Pearl came out, everyone was surprised by how a film based on a Disney theme park ride resonated at the box office. It was a fresh reboot of old ideas in a shiny packaging of CGI and fresh faces. 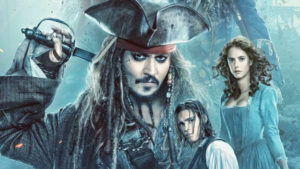 This latest Pirates film mirrors that first one – a young couple are thrown together in a jail, and a quest for mythical treasure ensues. But, it does so in copycat fashion, rather than as a sparkly reboot.

Though it does have the fantastical element of dead men walking, this Pirates sequel is more focused than its immediate predecessor.

The Trident of Poseidon

The young couple this time around are pragmatic astronomer Carina Smith (Scodelario) and dreamer Henry Turner (Thwaites), who yes, is the son of Elizabeth Swann and Will Turner. The two bond over their daddy issues – she is an orphan trying to fulfill her father’s life’s work while he is determined to save his father from a watery fate.

They go looking for the Trident of Poseidon and enlist Captain Jack Sparrow (Depp) to find this lost treasure which can apparently break all curses.

This time around the bad guy is a Spanish captain named Salazar (Bardem), who is long dead, but still hell-bent on finding Sparrow and killing him because hunting pirates is what he does.

The plot has many holes and convenient devices to move people from one place to the next. Where The Curse of the Black Pearl and its two sequels had a twisted kind of logic to them, here myth and astronomy collide badly and the inevitable riddle that will make all things clear is illogical, and maybe even paradoxical.

But, logic is not why people watch a Pirates of the Caribbean movie. While perpetually drunk but oh so clever, roguish charmer Jack Sparrow is always fun to watch as he minces his way out of trouble, it turns out the heart of these movies has always been the romantic relationship between pirate-at-heart Elizabeth Swann and reluctant swashbuckler Will Turner.

Also Sparrow’s chemistry with both was always palpable, but here it is left to Barbossa (Rush) and Carina to forge something new.

So, for the most part we get more of the same – scary dead folk menacing the living, impossible battles at sea, explosions, plucky sword fights and daring escapes – which is really the safe experience most blockbuster seekers want anyway.

This is a franchise which may have run out of the kind of steam film critics are looking for, but it still delivers for the popcorn munchers.

Wait till the very end though, the post credit scene hints at a sequel, which just might steady the ship.