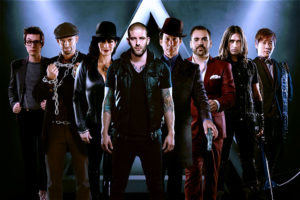 There’s something so darn amazing about a magic show. For an hour or two you get the chance to forget about that deadline from SARS, whether Rabada has lost his winning streak, or when those JoJo tanks you ordered will arrive.

Instead, you get to indulge your inner Harry Potter and Hermione Granger as belief is suspended and enchantment steps in.

That’s how it rolls when The Illusionists come to town. It’s not often you get to see eight of the world’s top magic people under the same roof on one night. From sleight of hand to mind-reading, crossbow mastery to card manipulation, you couldn’t hope for a slicker set. The acts come one after the other with speed, power and flow, and you can’t help but get caught up in the sheer fascination of it all.

The Illusionists Direct from Broadway – what a line up!

The show begins with David Williamson, aka The Trickster, welcoming the audience with a neat line in both patter and party tricks. Smooth and assured, Williamson blends a stand-up comedian feel with his sleight of hand skills and, as he demonstrated later with a swarm of little school kids, a dark sense of humour. Lovely stuff.

Then it was the turn of Den Den, otherwise known as The Manipulator. In sharp contrast to the loud music and large stage effects seen in other pieces, this was a muted, almost peaceful performance. With moments of unexpected beauty. Conjuring origami birds from the air and creating confetti loads of colour, Den Den’s presence was both poetic and uber-professional. 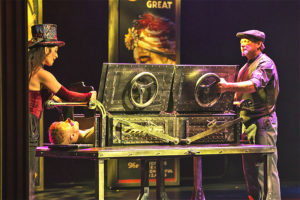 In contrast, Kalin & Jinger (The Showman and the Conjuress) have a steampunk edge with echoes of traditional vaudeville and retro-pimp. They take on fairly conventional He does/She does roles (guess who gets sawed in half, for example?), but their schtick is fun and they clearly get a kick out doing stuff like being pierced by burning spears (guess who again?).

Then we met quirky Chris Cox, a mind reader who blends magic, psychology and humour to produce an act that is both eccentric and yes, mind blowing. Tall and skinny, with scuffed tackies and a Tintin quiff, he’s able to warm up an audience very quickly. Until he starts telling people when their birthdays are, and what sport they play, and who their favourite band is. Then it all starts to feel a little hair-raisingly chilly. But he’s a class act, no doubt – I spoke to the three people who he had singled out in the audience, and they all swore they were not part of the show, had never met Chris Cox, and that everything he said about them was true. Spooky!

Also spooky in a different way was Ben Blaque, the Weapon Master. Basically, Ben is to a crossbow what Lewis Hamilton is to a car. They operate on another level to us mortals. Ben can literally split hairs with an arrow, and his finale involving an apple, several bows and a blindfold was incredible. Ben is a bit like Daryl from The Walking Dead but with longer hair and a Goth wardrobe, all of which makes him pretty cool in my book. 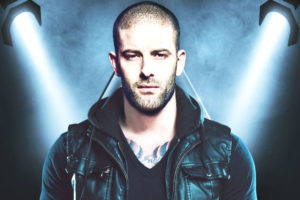 And then we saw Darcy Oake, the Grand Illusionist, who comes with a serious CV (appearing before 200 million viewers on Britain’s Got Talent, performing for the British royal family etc). He’s very easy on the eye, is Darcy, and his talent for performance art and illusion is unmistakable.

He has a flair for the dramatic and a very physical presence onstage, and he lived up to his hype with a series of polished manoeuvres that had us all grinning and gasping in equal measure. (Just one comment – most circuses don’t use live animals any more. Maybe we could see the magic sector follow too?)

The Illusionists Direct from Broadway provided a brilliant evening of astonishment and laughter, incredulity and amazement. They brought out the kid in all of us, and let us ignore, for a few hours, the more pressing realities of daily life. And that’s the magic of it all.

Note: Cape Town audiences didn’t get to see escape artist Krendl due to water restrictions and the logistics of his show. But he will be at the Montecasino Teatro.

What: The Illusionists Direct from Broadway
Where and when:
GrandWest from 7 – 11 February 2018
Montecasino Teatro from 14 February – 11 March 2018
Book:  Computicket
WS