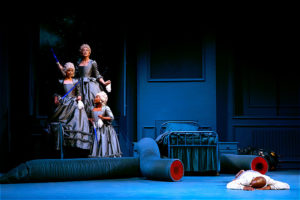 Second stroke of brilliance: Linking the concerns of the South African #FeesMustFall movement to a German opera written nearly 230 years ago.

Third count: Having faith in a set of young SACM opera trainees and graduates to pull off one of the world’s most well-known and beloved works.

When director Matthew Wild was first putting together this production for the South African College of Music (SACM) in 2015/16, the #FeesMustFall spirit was sweeping through South African universities, bringing with it questions around ownership of knowledge, the interrogation of curriculums, and widespread discussion and debate. One of the consequences of that period was that the planned 2016 SACM production of The Magic Flute had to be cancelled.

Fast forward a year – and Wild has used this experience, and the learnings that came out of it, to present a Magic Flute that is contemporary, relevant, questioning and challenging. It’s extremely clever and, as far as I could feel, devoid of either a patronising or pandering motivation.

The production opens with a young flute student, Tamino, pondering whether he should practice his instrument, study his set work (The Magic Flute) or have a smoke. Several puffs of the holy weed later, and Tamino is holding a ganja-infused argument with himself about the merits (or lack thereof) of Mozart and why Star Wars hasn’t been made into an  opera (yet). 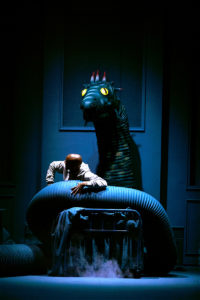 This internal debate, stunningly presented via Kirsti Cumming’s video designs, sets the bar for a Magic Flute that is suffused with pop references, socio-political jokes and funky set and costume designs. As Tamino the student falls into a dope-induced sleep, so the opera unfolds. And, taken the weak plot and misogynist tone (blame the librettist), stoned is probably the most sensible way to approach the narrative.

Love in the age of Tinder

Which, in its original form, is a tad embarrassing. On the good side: There are some noteworthy themes within the opera which acknowledge the mystical power of music and the morally sound path of love, light and forgiveness. Vengeance is not an option, enlightenment is a goal. But. On the bad side: The villains in the tale are a woman and a black dude, and it’s made very clear that they are Other, Different and Wrong.

Wild tries his best to move beyond this by turning Monostatos the Moor into a robot, and it works quite nicely. The Queen of the Night, however, is stuck with being a hysterical female (even though she has a nice line in arias) and there’s not much to be done there. The romantic plot is also unbelievably trite, although in this age of Tinder it almost makes sense: see a picture, swipe right, fall in love. Bam.

You can start to understand why Wild chose to turn this into a dagga trip.

To summarise – a young man called Tamino is persuaded by the Queen of the Night to rescue her daughter Pamina from the supposedly evil high priest Sarastro. Tamino sees a picture of Tamina and falls in love with her. He also realises that the priest has admirable ideals and decides to join his community. Tamino and Pamina must then undergo a series of tests to prove their love and integrity before they can be together. Tamino’s best buddy Papageno also scores by getting a girlfriend called Papagena. 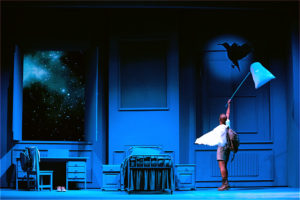 On opening night Tamino was sung with assurance by Nkululeko Masuku, with a cheery and well-rounded Martin Mkhize as Papageno. Thomas Mohlamme played Sarastro with suitable gravitas, while Leah Gunter carried off the Queen of the Night (and that piece) with flair. The Three Ladies, the Three Boys, the extra roles and the chorus were all confident and strong, and a pleasure to both watch and listen to.  But if I had to single out a star for the night it would be Brittany Smith as Pamina. Her dynamics, her range, and her expression were in a class above, and she shone.

This Magic Flute flips the bird at dead white composers, questions the relevance of studying Wolfgang Amadeus in the first place, and recognises the racism and sexism in the production and tries to do something about it. The use of contemporary visual references in video, costume and set design, is eye-catching, amusing and relevant. It’s Harry Potter, Star Wars, Marvel Comics and Mozart – and it’s fabulous.

What: The Magic Flute