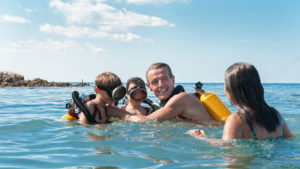 Beautifully filmed, The Odyssey tells the story of the Jacques-Yves Cousteau you did not get to know through his documentary films.

Pioneer, innovator, conservationist, filmmaker, researcher – Cousteau (Wilson) is shown to be all these things as he explores the seas in his home, the research vessel Calypso. We watch him make his documentary films which served to make entire generations curious about underwater life and kept him busy all his life.

The film is bookended by a pivotal event in Cousteau’s life – the death of his younger son, and then moves back in time to the moment he made his first film and then moves forward in linear fashion.

We see how Cousteau wheeled and dealed to get his way, and what it cost those around him. Audrey Tatou is underutilised as Cousteau’s wife Simone. While she is shown to have bankrolled the first Calypso and to be very supportive, Simone’s feelings about his philandering ways are downplayed, and we don’t get to see much interaction between the couple.

Instead Lambert Wilson dominates the screen, as we get to see the highlights of Cousteau’s life. While we do see how he resented the responsibility fatherhood brought, this aspect of his life is never really explored.

If you know about Cousteau’s life you will know there is much (an entire other family) that is left out of the film. That is not to say you do not see a lot happening. In showing so much though, the filmmaker doesn’t really tell you much about the man. We see what he did, but get very little exploration of why.

Interspersed with old footage and digitally created underwater sequences the film does succeed in evoking a wonderment on the part of the viewer whenever anyone goes underwater. The sequence in which his first film, The Silent World, is first shown to a public audience mirrors the silent audience who will watch this feature unfold on the big screen.

In the film Cousteau decides to make a series of films for monetary reasons, knowing full well he had enough source material of the oceans. One has to wonder whether his life story would not have been better fodder for a TV series, considering just how much he did. This might have done justice to the complex character hinted at in L’Odyssée, instead of just creating a narcissistic character who liked the ocean more than he liked his kids.

Note: L’Odyssée is in French with English subtitles.