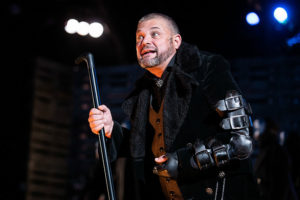 There’s something of the Tyrion in Alan Committie’s portrayal of Richard III – an impish confidence, a roguish swagger. Yes, he’s a conniving conspirator. But he’s also a charmer, one who makes the most of Shakespeare’s device of letting him address his audience confidentially and constantly. We are drawn to Richard, even as we abhor what he is doing. Like Tyrion in Game of Thrones, we even feel a little sorry for him. But unlike the GoT dwarf, Richard III has no redeemable qualities. And ultimately, what affection we may feel at the start of the play is eroded away by the end.

It’s a tough role to play – and no wonder the heavyweights (Laurence Olivier, Antony Sher, Kevin Spacey, etc) love to tackle it. So it’s an interesting choice of casting here – not an obvious one, at all. Committie is commonly renowned as a stand-up comedian. But what makes his treatment stand out is exactly due to his background. He brings a witty edge and comic timing to the part, adding a dash of brio to a play that is, for the main part, deathly serious. 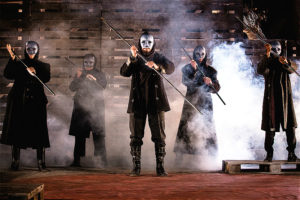 Which is not to say Committie cannot handle the weighty load of the work. He can, and does, with an impressive presence. It’s a great performance, directed with much acuity by Geoffrey Hyland. And, of course, Committie has some of the best lines, beginning with “Now is the winter of our discontent” and finishing with “My horse, my horse, my kingdom for a horse”. And his whispered “I’m King” three times at the end of the first act was masterfully chilling.

A monster of a piece

Richard III is a monster of a piece, exposing the machinations of a man obsessed with power and the chess-move responses by those in his orbit. It’s the Bosasa scandal on speed, the Zondo commission on tik. Corralling the narrative with its many players, and packaging it into an engaging production, is the challenge, which Hyland has clearly risen to. The piece feels as relevant now – especially relevant now – as ever.

The synopsis is long, but suffice it to say that it concerns the plans of Richard, circa 1471, to ascend the throne of England – no matter how many bodies are in the way, or who he has to wed. As the death toll rises, so too does the groundswell against Richard, reaching a decisive climax with the Battle of Bosworth Field. 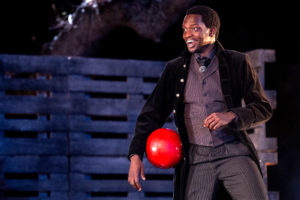 Despite its gory plot, Richard III is surprisingly non-bloody – most of the murders take place offstage, leaving the actors to convey the horror and sometimes helplessness of events. And here we have a cast that, for the most part, rises to the occasion. The quartet of women – Anthea Thompson, Lee-Ann van Rooi, Bianca Mannie and Cassandra Mapanda – all bring differing levels of gravitas to their roles, Thompson particularly striking and Mapanda regally feisty. Andrew Laubscher is a calmly captivating presence, while John Maytham is just a joy – always professional, always on point. The ensemble catch all the floating roles with enthusiasm. Which brings us to Sanda Shandu, who starts out as part of the troupe but gradually graduates, over the course of the play, to larger parts, ending with an impressive final flourish as Richmond, saviour of the day. The Fleur du Cap Supporting Actor winner has an electric presence which is a pleasure to watch.

The lighting, sound and set can’t be faulted – muted but functional. The costume design is stylishly sombre, with one dramatic flash of red.

Richard III is very much a play for our time – it’s dark, it’s brutal, it’s sobering. This production brings it all to the fore, with a team that rises admirably to the occasion. Very much recommended.

Where and when: Maynardville Open-Air Theatre from 7 February until 9 March 2019