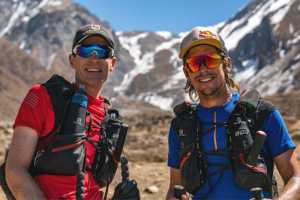 Lessons from the Edge, a film documenting Ryan Sandes and Ryno Griesel’s epic adventures traversing the Great Himalaya Trail in 2018, will broadcast on SABC 3 on Sunday 13 September 2020 at 8pm.

Ryan Sandes says the trail was the the biggest adventure of his life and incredibly challenging, especially mentally. “Looking back on our GHT attempt, it is definitely one of the craziest projects I have attempted, and it was really awesome to have my close friend, Dean Lesley with Jared Paisley, along to document the journey,” says Sandes.

Lessons from the Edge sees Sandes and Griesel cut across heavily snow-covered mountains and experience incredibly extreme weather conditions. They suffered frost-bitten fingers, serious tummy bugs, breathing difficulties and a few near death experiences. A constant on the route, however, was the incredibly welcoming spirit of the Nepalese people who truly embody the spirit of Namaste, and welcomed the both of them into their homes.

Ryan Sandes is a South African trail runner. In 2010 he became the first competitor to have won all four of the 4 Deserts races, each a 6/7-day, 250-kilometer self-supported footrace through the Atacama Desert in Chile, the Gobi Desert in China, the Sahara Desert in Egypt, and lastly Antarctica. His achievement prompted Mary Gadams, founder and CEO of RacingThePlanet and organiser of the event, to state “Ryan Sandes is clearly one of the top endurance athletes in the world – to have won all 4 Deserts is a remarkable accomplishment.” To date only 81 individuals have completed all four trails. Eleven competitors have managed the 4 Deserts Grand Slam, that is, completing the four trails in a calendar year (from 1 January to 31 December of the same year). In 2010, Time magazine included the 4 Deserts Challenge on a list of the ten most demanding endurance races in the world.

What: Ryan Sandes: Lessons from the Edge