Long, long ago, in a galaxy far, far away, Leia sent Rey to go looking for her brother. But, it turns out Luke is just having none of that because he firmly believes the Jedi need to be gone already. No, that isn’t a spoiler – it’s in the trailer.

But, don’t worry, there is so much that isn’t in the trailer. As Luke puts it: “This is not going to go the way you think,” and truly, it doesn’t.

Talking about the storyline for Star Wars: The Last Jedi does rather take away the surprise, which is half the reason you go to watch the movie. The other half of the reason is the absolute sheer spectacle of gorgeous visuals. The intricate world building and creature design makes you feel like it is all real.

This is a movie made for the big screen – space battles for epic scale, scary land battles for intimate one on one fights and little details to fill in the gaps. Like, we know the porgs are the hot ticket toy of the season, but finding out where they come from is funny. 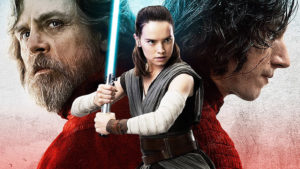 In fact the film has a lot of funny moments, jokes that probably owe a lot to Marvel Studio’s influence on movie making. But, that’s ok, Star Wars has had just as big an influence on the movie world and popular culture. So, we expect

The Last Jedi to reference its predecessors not only in terms of furthering the storyline, but also the actual structure of the films. Yes, The Last Jedi does reference Empire Strikes Back to a certain extent but not as slavishly as The Force Awakens mirrored A New Hope.

The jokes help to change the tone for one thing, but so does Mark Hamill. Now he gets to be the old man imparting his wisdom and his Luke Skywalker is a very different Jedi Master to wily Ben Kenobi.

We are introduced to two new planets – the blingy lights of casino world Canto Bight and the salt flats of Crait as well as several new characters.

Most of the big players from The Force Awakens returns as the First Order chase down the remaining remnants of the Rebellion, having practically destroyed the New Republic’s bases of power. Carrie Fisher’s Leia Organa is pragmatic focusing on the survival of her people, much to the chagrin of Oscar Isaac’s Dameron Poe who wants to strike back with everything they have.

Finn (Boyega) vacillates between trying to stay out of the First Order’s crosshairs and wanting to save his friend Rey (Ridley) who is just trying to figure out her place in the world. Plus we learn a bit more about why Ben Solo (Driver) is the way he is and get up close and personal with Supreme Leader Snoke (Serkis).

There is just so much happening with so many people that unlike The Force Awakens we never really get a sense of any one person’s arc or personal growth. Except maybe Luke who finally understands what Yoda was trying to tell him all those years ago.

So many films in Star Wars can afford to make a film that covers such a short span of relative time, where a lot of things happen to set up a way forward. We are now at the point where the personal storylines span multiple films to make up a space opera that gets watched on repeat.

Epic, fun, visually sumptuous, it will tug at your heart strings because we come to know the characters across several episodes and we root for them when we recognise our own emotional responses in theirs.