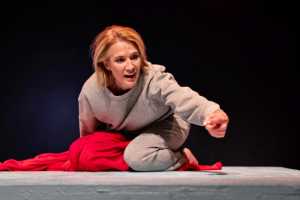 A new South African production of Gail Louw’s internationally acclaimed play The Good Dad will have its South African premiere run at The Drama Factory from 28 June until 3 July 2022.

Presented by Unlikely Productions, the play features Erika Marais (pictured above), who was nominated for Best Actress for her portrayal of Eleanor Kasrils in The Unlikely Secret Agent.  Paul du Toit translated the text into Afrikaans for Die Goeie Pa  and once again collaborates with Erika to direct her in this play.

A happy family. A good father. Everyone thought they were a lovely family. But every family has something to hide and drawn curtains hide dark secrets.

Die Goeie Pa explores the dramatic journey of three characters, a mother and her twin daughters, and the psychological effects of their abuse: denial, guilt, jealousy and Stockholm Syndrome.

The play is a powerful but gentle telling of a devastating story, a moving account of survival and redemption.

“Gail Louw’s lyrical text lends itself to theatre of the mind and so for the design of this production, I wanted to allow the audience space to engage with the various prisons that keep these characters captive, joining them in their search for absolution, redemption, and freedom,” says director Paul du Toit.

“I am honoured to be performing this important story in my home country, South Africa, and in my home language, Afrikaans,” says actress and producer Erika Marais.