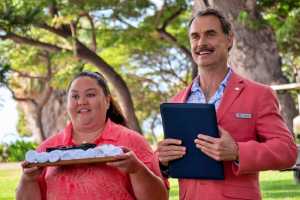 The new HBO series The White Lotus, which is currently screening on Showmax, has been hailed as one of the most awkward yet brilliant productions of the year. KAREN RUTTER watched a whole lot of rich, mainly white people behaving badly:

The White Lotus, a series about the “monstrousness of affluence” is set in a luxurious hotel resort in Hawaii. The scene is set in the opening minutes as staff members stand to attention as they await arriving guests; hotel manager Armond (Murray Bartlett) encourages his team to “embrace vagueness” so that they appear indistinguishable (and thus ever on duty) to their clients. The “upstairs and downstairs” theme is carried through each episode as the hotel guests – privileged, needy, mean, arrogant and cruel – play out their holiday fantasies unmindful of the lives they carelessly impact on they way. The difference between those vacation in a space, and those who live and work in that space, is laid painfully bare.

There’s Tanya, an “open wound in designer caftans” as the New Yorker puts it (brilliantly and blowsily played by Jennifer Coolidge) who shamelessly exploits the kindness of wellness consultant Belinda (Natasha Rothwell); alpha-beta couple Nicole, CFO of a tech company (Connie Britton) and insecure husband Mark (Steve Zahn), who believe straight white males (like their teenage son) are having the hardest time ever in this MeToo world; mean girls Olivia (Sydney Sweeney, barely-concealed obnoxious arrogance behind a veneer of wokeness), and her friend Paula (Brittany O’Grady); newly-marrieds Shane (Jake Lacy) and Rachel (Alexandra Daddario), the Worst of Wasp; and so on.

The dynamics between black and white, haves and have-nots, men and women are tweaked with exquisite precision; creator Mike White captures the unthinking unkindness, the “inequities and iniquities” as The Guardian says, as events begin to unravel. And yet he is not wholly unkind – nobody is pure evil (or completely innocent). They are simply captured, like insects preserved in amber, for posterity.

We know that somebody dies (no spoiler alert here) as the series begins with a dead body being transported onto an aeroplane. How we get this point – and who dies – is part of the deliciously uncomfortable journey. Despite the sumptiousness of the setting, The White Lotus reveals a deeply rotten core. And yet, despite all this, it also resounds with a dark sense of humour throughout.

There’s talk of major Emmy awards for this, already, and another season, with new characters and a new locale. If they nail it like Season 1, I can’t wait.

What: The White Lotus