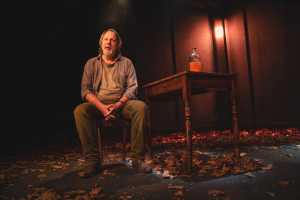 Judging by the calibre of this production, the first to grace Baxter boards in over six months, local theatre post-Covid-19 is not only alive and well, but in blazing form.

Louis Viljoen’s new one-hander testifies to the adage that in art, genius is the ability to create something extraordinary out of the ordinary. The evocatively named Muckridge is a dull, middle-aged man imprisoned within the confines of his home (where he cares for his bedridden mother) and the inhibitions of his shrivelled self-esteem. On a day of note, he reviews the relentless succession of failures in his life, from unloved childhood to bleak present.

In this unenviable situation he has three avenues of escape: alcohol, nostalgia, and fantasy. He flirts with the first, seeks occasional comfort in the second, and luxuriates frequently in the third, his solace of choice …

This is where Viljoen’s script, Committie’s direction, and Maytham’s acting coalesce to brilliant effect.

Of the characters to which Muckridge aspires, the most alluring is the devil-may-care outlaw of the western movies he watched as a child. A specimen of manhood as different as possible from his own timid, subjugated personality. When he impersonates a bandit, his speech and posture become assertive, he swells with confidence and machismo – until recalled to present reality. The dream deflates and dusty boots are all that Muckridge the drudge has in common with Muckridge the Outlaw. 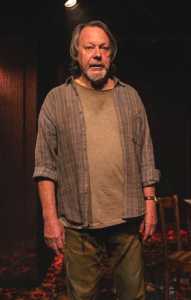 Equally liberating is an excursion into an alternative reality as he revisits dismal episodes in his past, substituting a different version of himself for the real Muckridge who was a comprehensive failure as child, schoolboy, adolescent, lover, philanthropist – and son.

A scenario of this sort presents major challenges for both director and actor: it can become self-indulgent, predictable, and tedious with fatal ease. Between them, Committie and Maytham keep their audience enthralled for the play’s duration through skillfully metered pace and nuanced portrayal.

Then there is Viljoen’s text, startling as ever in its juxtaposition of elegantly articulated images and grossly explicit obscenities. Unlike in his earlier works however, the latter element is tamed to fit its purpose rather than permeating the whole – and its impact is all the greater.

The dramatist excavates the resources of language to achieve a new richness of metaphor, and Maytham’s polished delivery does it full justice, whether bellowing or whispering.

An additional demand on the actor’s versatility is the intermittent portrayal of Muckridge’s female parent, a sadistic vixen whose speech and personality beggar description. Maytham handles it all with aplomb on a stage of minimalist design which nonetheless conveys earthiness, potential escape and chilly confinement thanks to Niall Griffin.

As an unexpectedly tender dénouement unfolds, all the pain and rancour dissolve in yet another fantasy, the ultimate refuge of the Outlaw Muckridge, to deliver a poignant affirmation of the human need to be loved.

Where and when: Baxter Golden Arrow Studio until 24 October 2020

Please note: Patrons are encouraged to arrive an hour earlier to avoid delays and to wear masks as required by Covid-19 regulations

MBMS WhatsApp fest on your phone