Two dimensional acting mars a beautifully realised multi-dimensional concept of a huge city filled with aliens from all over the galaxy.

A market scene which starts off the film is jaw dropping, creating a place that feels real even though it is shown in the film to exist only virtually.

Despite a plethora of fun cameos from well known actors giving it their all, this high concept sci-fi action adventure flick falls flat because its leads are not up to par, and the plot is very simple in comparison to its setting. 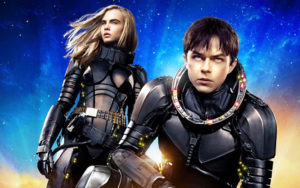 Writer/director Luc Besson (The Professional) is good at world building and artist Jean-Claude Mézières, who worked on the original Valerian comic book, helped create some of the concepts used in The Fifth Element. Here Besson returns to what he is good at after a foray into writing screenplays for action movies like Taken, Colombiana and The Transporter.

Based on an old French comic series (1967 to 2010) centred on two spatio-temporal agents this film ignores the time travel angle and steals a whole lot from James Cameron’s blue-skinned aliens.

In the 28th century Valerian (DeHaan) and his partner Laureline (Delevigne) are assigned by the Minister of Defence to figure out what the dark mystery is at the heart of Alpha, an ever-expanding metropolis where species from all over the galaxy have gathered for centuries to share knowledge, intelligence and culture.

Besson adds several very diverting characters, including a mesmerising, if tiny, performance from Rihanna as the alien dancer, Bubble. But, ja well, you know who is going to be at the heart of the problem from the get-go and can see the ending coming from a mile off.

One of the best things you can say about this film is it is not overwrought space opera Jupiter Ascending. The action has a clear line to follow and the plot may be simple, but it is effective.

You have to wonder though what this film would have been like with two stronger actors like Channing Tatum and Mila Kunis.

Delevigne and Dehaan are too weak, they can’t pull off the cheesy dialogue. The Valerian character is supposed to be arrogant and full of himself because he is such an amazing agent, but you never think that, you just think he is silly.

Right at the beginning of the film, when Valerian proposes to Laureline, you think it is a joke. You think it is the film’s running joke when he does it a second time. You have no reason to think he actually feels deeply for her. The two have no chemistry.

But, the story floats on by on the events that happen and on the amazing world building, the distractingly intriguing aliens (where have you seen these aliens before is going to turn into a drinking game) and that market in the beginning is just so super cool.