Violinist Ye-Eun Choi makes her Cape Town debut with the Cape Town Philharmonic Orchestra this month at the City Hall. She talks to PETA STEWART: 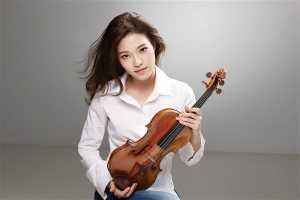 Respect is important for Ye-Eun Choi, the Korean violinist who will perform the Sibelius Violin Concerto on 27 June 2019 in the final concert of the Cape Town Philharmonic Orchestra’s Winter Symphony Season.

Citing Anna-Sophie Mutter and another teacher, Ana Chumachenco, as having the greatest influence on her life and her music, she says: “I respect their music, their humanity and their lives so much. It’s a very rare thing to meet somebody who you have respect for in all of these areas at once.

“It’s been almost 13 years since I met Anne-Sophie Mutter. She saw a video and invited me to Munich to audition. I had to play pieces by Mozart, Tchaikovsky, Beethoven, Paganini and Bach, all of which were basic violin repertoire.  It was one of the most thrilling moments in my life. She gave me lots of advice and support over the next eight years while I was studying  at the Musikhochschule and now she is not only a teacher, but also my closest friend and family; I call her mom in private! I couldn’t explain my life without her,” admits Ye-Eun Choi.

“It means a lot because it was the first violin concerto I played on a European stage – during the final  round of the Leopold Mozart International Competition in Germany where I was awarded second  prize. This was actually the start of my career in Germany.  It led to meeting Ana Chumachenco who took me on as a pupil. So every time when I play the Sibelius Concerto, I think back and I am surprised every time to see how much I have developed since first performing it more than ten years ago.”

Ms Choir was an active child, sporty, emotional and expressive. “My parents could read me … when I was still, it meant one of two things:  I was immersed in some profound imagination or else I was in some sort of trouble! So playing an instrument was the perfect fit!  I have been falling in love with the sound of the violin ever since.”

Today Ms Choi’s life is very busy. She divides her time between orchestral and recital programmes,  and loves chamber music.

“I believe that chamber music opens up ways to understand composers more. For example, I couldn’t say that I know Beethoven fully without really knowing his symphonic and chamber works. They have more voices. All those detailed parts express his musical character and language harmoniously. So for me, it was easier to gain a greater understanding of his violin sonatas and concertos after getting to know his symphonic and chamber works, and it gave me a new inspiration for his solo pieces. But in the end, I realised that all his violin concertos and sonatas speak the same language as his chamber music and symphonic works, just in different forms.”

She also gives masterclasses, and finds it a great pleasure to meet other young musicians who share their feelings and knowledge.

“This creates room for new discoveries and in the end the masterclasses are as much about them as they are for me,” she says.

It’s not only music that makes Ms Choi’s world go around.  It’s love and nature as well.

“These two things drive me to play music and live. And I believe in their power. No matter what happens, they won’t ever disappear from my life.”

She comes to Cape Town from recitals in Bergen and a Prokofiev concerto in England, and leaves us for concerts and recitals in Italy, Austria. Estonia, Germany and Portugal.

Also on the CPO programme are De Falla’s Three-Cornered Hat suite and the Symphonic Dances by Rachmaninov. Daniel Boico is on the podium.