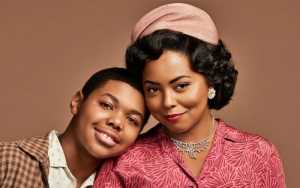 Women of the Movement is available to binge on Showmax from May 2022. The historical drama is based on the true story of Mamie Till-Mobley, who in 1955 risked her life to find justice after her 14-year-old son Emmett was brutally murdered in the Jim Crow South. Unwilling to let Emmett’s murder disappear from the headlines, Mamie chose to bear her pain on the world’s stage, emerging as an activist for justice and igniting the American civil rights movement as we know it today.

Adrienne won a 2020 Tony Award for Best Actress in a Musical for her portrayal of the iconic Tina Turner in Broadway’s Tina. In an interview with Entertainment Weekly, she compares Tina and Mamie, saying, “They are both fighters in their individual ways — because they had to be, not necessarily because they wanted to be, which I think is important, especially when you’re bringing light to stories, specifically, about Black women. Black women are often seen as, ‘Oh, they’re warriors or fighters and they’re so resilient.’ But there are many times where people don’t want to be in those situations, but they have to rise to the occasion because of their circumstances.”

“Women Of The Movement soberly reminds us that far too many Black mothers today, including Sybrina Fulton, Geneva Reed-Veal, Wanda Cooper-Jones, and Rep. Lucy McBath, must still follow Mamie’s path,” says AV Club. “Sometimes justice is achieved but often it’s still denied, and in every instance, a child is lost forever.”

What: Women of the Movement

Where and when: Showmax from May 2022