With over 50 choreographers, the 2019 Baxter Dance Festival is a veritable smorgasbord of styles on offer writes THERESA SMITH.

The addition of Monday night’s Highfliers Programme brings the Festival up to four tiers – an indication of the deepening of local choreographic experience and skill.

There’s everything from Kathak Indian dancing to classical ballet to tap dancing, with a little taste of things to come in the foyer before the start of each night’s main performance.

Drawing on more than 200 dancers who take full advantage of The Baxter Theatre’s deep stage, the choreographers not only showcase their skill at directing beautiful motion but they also tell a story of who we are and what we feel. 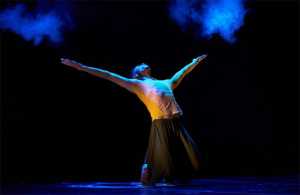 This year’s emphasis on female voices and stories is not unexpected (and most dance groups seem to have gotten the memo that this year’s de rigueur gender neutral costuming means put the guys in dresses), but the dark spin on the dance vocabulary and occasional prop, is dismaying as a very honest glimpse into just where we are at as a people.

Like Olwethu Sotinya’s Domination (Is’thatha Dance Project) on the Off Main Programme, the EOAN Group Theatre’s Dead Girls Dancing is a powerful indictment on the religious and socio-political systems that keep power out of the hands of ordinary people.

Domination was a short excerpt from a much larger work that while Dead Girls Dancing is a complete work, and both really need more exposure. The EOAN Group Theatre’s contained precision work is just as disquieting, yet hypnotic as the Is’thatha Dance Project’s more frenetic outpouring of pain.

So too Janine Booysens’ Say Something, Do Something (UCT Centre for Theatre, Dance and Performance Studies) makes for discomforting watching, interrogating as it does the trauma revisited on relationships by constant and ever present sexual violence.

That is not to say that everything is heavy seriousness, there are light-hearted moments like Michelle Reid’s delightful Contraband for the Cape Academy of Performing Arts or Sbonakaliso Ndaba Ingxoxo Yabafazi (Stories of Women) which saw the Indoni Dance Arts and Leadership Academy challenge the perception of women as weak.

There are three more varied programmes on offer for the second half of the Festival. Two very different Main programmes which will feature seasoned choreographers playing with perspective and emotion and the Fringe programme where you could again catch a glimpse of some of the performances crated for the Kaapse Dans Solo Festival.

The exhibition of photographer Oscar O’Ryan’s work (pcitured in these reviews) over several years of capturing the Dance Festival is also well worth exploring.