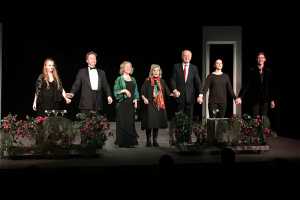 Even for experienced thespians, it takes skill to, in seconds, cast off one character’s accent, body language and personality, to turn into someone else – without losing the essence of the next playwright’s intent. How easily this quartet transformed – while, simultaneously giving LAMTA trainees Michael Stray, Amy Reed and Line Koen insight into “how experts do it”.

The set is superbly simple. A black velvet curtain-boxed stage has grey and white doors inserted upstage right and left. A round table, a couple of chairs, a hat stand and a multi-functional oblong cupboard, which, when shifted around, alter venues. The women, in basic black numbers, dressed them up with gorgeous coloured scarves, satin jackets and, in one sequence, a glorious peacock throne-like sequined fringed cloak.  The men tended to casual wear or suits.

4 Love opens with an introduction

Led by Kidd who, throughout acts as continuity presenter, 4 Love opens when the four introduce themselves. Then adding bits and pieces to basic outfits they presented the FDR scene (final dress rehearsal) from Michael Frayn’s comedy Noises Off. What a nightmare. Dotty (Kidd), in charwoman guise, is truly dotty. She remembers neither words nor actions, nor where her sardines go. A true comedienne, her timing and natural “inability” is really funny. So too are Carrie and Waring whose planned champagne and sex romp goes awry because of Dotty and her sardines. Not surprisingly “producer” Douglas stalks off.

In Absurd Person Singular Ayckbourn’s farcical humour comes through when dithery, over anxious Jane (Carrie) can’t do anything right. She earned most laughs flapping around before her guests arrive (Kidd and Douglas), then skedaddling off to buy tonic water in wellies, raincoat and hat.

The gist in John Osborne’s 1956 realist Look Back in Anger is the clash between the classes. The scene presented is where Alison (Carrie) is packing to leave her husband Jimmy, and her father (Douglas) is waiting to take her home. Carrie’s father’s snobbish influence in the marriage breakup is strong – they are upper class. Jimmy, although intelligent, is working class. Softly spoken Douglas identifies another problem. His views that everything has changed since his youth conflict with Jimmy’s liberal outlook that quails because nothing has changed since his youth.

In Bennett’s Single Spies, poignancy plays out when Guy Burgess (Waring) meets actress Carol Brown (Kidd). Burgess, one of Britain’s most notorious traitors, fled to Moscow in 1951. Twenty five years later the pair meet in Burgess’s drab Moscow flat. Kidd sits passively while Waring tries to justify his betrayal. Yet it is obvious he has regrets. He yearns for London and longs for a decent English tailor-made suit, hat and new Eton tie. All items he begs Brown to order for him in London. Waring, as Burgess,produced a consummate, emotional performance.

From an unpublished piece by Harold Pinter Kidd crafted a sketch between Douglas as President Trump and his secretary (Waring). Sitting behind a stars and stripes flag, Douglas, in a copy-cat Trump act ordered his Defence Minister to “nuke” London.  Trouble was he meant Paris. Hilariously amusing except, the underlying truth is, President Trump’s geography is wanting.

The final scene is on the floral balcony in Noel Coward’s witty Private Lives. That’s where previously married Amanda and Elyot (Carrie and Waring) meet up again whilst on their respective honeymoons to Victor and Sybil. Typically they start quarrelling, but decide to run away together anyway. A romantic end to an evening noted for polished acting that took the audience on a journey through a gamut of real life’s experiences and emotions. A worthwhile night out.