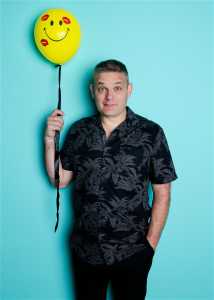 Great news – the Theatre on the Bay is opening on Fridays and Saturdays with Alan Committie and his latest show, Apocalaughs Now! (which was due to start in December 2020 but had to be postponed due to the pandemic).

The season will start on Friday 23 April 2021, (and if demand increases, more shows may be added during the week). All patrons who had booked for the December run are currently being contacted by Computicket and their tickets moved to the performance of their choice.

It’s been the wildest time yet with the most unexpected and crazy pandemic turning our existence inside out, and upside down. However, renowned funnyman Alan Committie is determined that we keep laughing in the face of it all.

Global lockdown, earthquakes in Plumstead, cigarette and alcohol bans, Cricket South Africa out for a duck, Trumpeting leaders blowing hot air and the only response we have had so far is to dance the Jerusalema  (which is how drunk people pronounce Julius Malema after 2am in the morning). But now Committie explores how we can stay sane and healthy in body, mind and soul with his usual madcap verbal wit and physical comedy shenanigans.

In Apocalaughs Now! directed by Chris Weare, our intrepid jester tries to understand wellness coaches, explores the world of Tik-Tok videos, and unpacks how we thought the world would end versus how it’s actually happening.

The Theatre On The Bay box-office will be open on show days.

Where and when: Theatre on the Bay from 23 April 2021, Fridays and Saturdays only for now