The Suidoosterfees and the Nasionale Afrikaanse Teater-inisiatief (NATi) have joined hands to bring audiences the exciting NATi Theatre Festival. 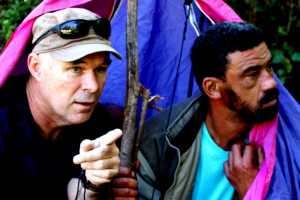 Various productions will be staged at Artscape in Cape Town from 26 April to 2 May 2021 as part of this year’s Suidoosterfees programme. Strict Covid-19 protocols are in place and theatregoers will be able to enjoy shows in a safe environment.

Ferdinand Bekker’s Kamp, with Deon Lotz and Brendon Daniels (pictured left), portrays two men camping out in the wilderness. They face unforeseen challenges when things suddenly go awry during the outing. Gaerin Hauptfleisch is the director.

In 2020, composer Ludwig von Beethoven would have reached the age of 250. The talented young actor, Ben Pienaar, brings Ludwig brilliantly to life in Beet.  Author Braam van der Vyver transferred Beethoven to a South African context in this gripping celebration of the life of a bohemian musical genius who struggled with going deaf.

Brandbaar, originally staged as Womb of Fire, is now performed in Afrikaans at the Suidoosterfees. Translated by Jason Jacobs, the production features two women from the early Cape Colony: Great Catherine of Pulicat, who arrived in the Cape as a slave, and the KhoeKhoen servant Zara, who ended up on the wrong side of the VOC. Rehane Abrahams, author of the original production, stars with Lukhanyiso Skosana in Brandbaar. 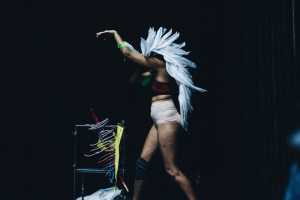 One woman shows and more

Cintaine Schutte portrays Mart in Marita van der Vyver’s popular Die dinge van ’n kind. Francois Toerien adapted Van der Vyver’s novel for the stage, and Nicole Holm directs the play that deals with issues like growing up, pregnancy and suicide against the backdrop of South Africa in the 1970s, when political lies and the border war structured daily life.

Sandra Prinsloo stars in Spertyd, a one-woman production based on celebrated author Elsa Joubert’s memoir. Spertyd is a frank, unsentimental account of growing old. In another one-woman show, Not my Children, Natalia de Rocha takes stock of motherhood after 34 years of raising children. Da Rocha seeks answers to questions all parents face. Some answers come easily, others remain elusive.

According to an ancient superstition, swans start singing just before they die. Buhle Ngaba’s Swan Song (pictured above), builds on this myth in her multidisciplinary show. It tells the story of a girl with a winged shoulder blade who struggles to fit into the world. In The Real Mrs Muhammad, playwright Simone Heradien examines the complex relationship between a practicing Muslim-Pakistani man and his atheist South African wife. Heradien acts in the production directed by Kurt Egelhof.

For the complete programme:  www.suidoosterfees.co.za