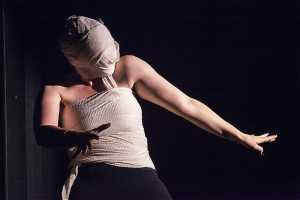 On this my very first visit to Strand Street’s Courtyard Playhouse, formerly the Alexander Bar and Theatre, I had absolutely no idea what to expect. Tastefully decorated in deep red and gold furnishings, friendly staff invite guests to wine, dine, or join in in regular Wednesday quiz evenings.  Other entertainment includes improvising games, sing-along fun and cabarets. Kiddies and teens are not forgotten and patrons also have an option to slip into a comfortable, air-conditioned, mini-theatre to see a show. On the night I went, the production was Amateur Hour!

According to the dictionary, “amateur” is described as a person who pursues something as a pastime rather than as a profession ie doesn’t receive remuneration for their handiwork. However “amateur” owns another tag. It also means a job that has been well and truly hashed up.

Snugly fitting into that latter category is Gwydion Beynon’s Amateur Hour! Over twelve vignettes, Glen Biderman-Pam and Jemma Kahn work their way through a series of nightmarish amateurish theatrical mishaps. On entering the theatre, a miniature Bluebeard’s Castle set,  ghostly noises and grisly voices speak about the inevitably of death. Thus we know death would be Amateur Hour’s! theme. Yet, deaths or no deaths, the show will go on. 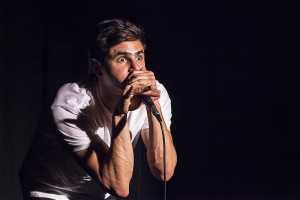 First up Biderman-Pam presented himself as JP, a newcomer to microphone techniques. While some may find it amusing to learn a brain tumour caused his fumbling, mumbling, jumbling which ended with an apology and blood pouring from his mouth, I did not. One should never mock a brain tumour – it IS far too deadly. Biderman-Pam scored highly in the poignant puppet scene, however, where, as an inept puppeteer, he mishandled one string after another until his dear little puppet fell dead.

Kahn’s diction is superb. Every word came across clearly as she constantly interrupted Biderman-Pam at their anniversary celebration. Kahn’s acts are also very physical. Into her Marcel Marceau mime blowing up a balloon act, she brought a touch of fun. And while one wonders how any person could mistakenly unwind her mummy’s body bandage to leave her breasts exposed to fresh air, instead of unravelling the one covering her face, Kahn did so with much wriggling and squiggling.

Beynon’s covert, rather than overt humour, leaves viewers just as befuddled, bewildered and bemused as expected from John Trengrove’s direction of Biderman-Pam and Kahn’s execution in Amateur Hour!

Where and when: Courtyard Theatre until 28 March