The Baxter Dance Festival 2018 will feature 32 works by 54 choreographers being performed over 10 days in October. Opening this year’s festival is Rolex Mentor and Protégé Laureate (2004) Junaid Jemal Sendi and Addisu Demissie Kifle from Destino Dance Company based in Addis Ababa, Ethiopia. The dates are Thursday 4 October until Saturday 13 October 2018. 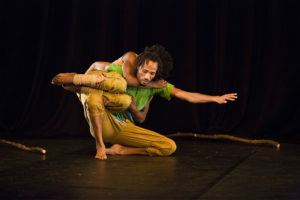 Sendi and Kifle will kick off the festival with  Ene Man Negn (Who am I), a duet about identity, choices and fate, as well as A Holding Space, a duet by London-based choreographers Russell Meliphant and Adam Benjamin that highlights the themes of trust and a dialogue between two people who share the same space and history. The opening night programme will also include a short film about the process of creating A Holding Space. The two performers share a powerful history as youth from disadvantaged backgrounds, who found their way to the Saddler’s Well stage, with the guidance of Dance United in Ethiopia. The Baxter Dance Festival will therefore start with a powerful message about how dance can be a positive catalyst in the lives of young dancers.

This year, some past festival favourites return with fresh compositions. Companies such as Jazzart Dance Theatre, New World Dance Theatre, Cape Dance Company, Arms & Length Dance Company, Dance for All and Darkroom Contemporary, each with their unique style, are back to showcase their work in a succinct and curated programme, focusing on the best that dance in the Western Cape has to offer and the new talent coming through the ranks.

The 2018 Baxter Dance Festival consists of the Main Programme, which will include invited and commissioned works by CAN Creative’s Nathan Bartman and Ciara Baldwin. Work by recognised professional choreographers and companies will also be showcased and will runs for the duration of the festival. The Off-Main Programme, on Saturday, 6 October, will showcase work by up-and-coming choreographers (including student work), and the Fringe Programme on Saturday, 13 October, will include work by youth groups, dance schools, school groups, traditional dance groups and others. 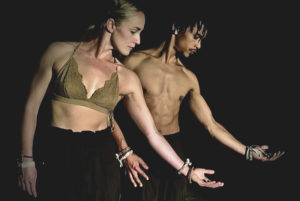 This year the Baxter’s commissioned work was chosen from applications received. Nathan Bartman and Ciara Baldwin of CAN Creative, a dance company devised by the two, that explores original topics and expresses them through dance, physicality, music and the spoken word – always striving to create a positive message and trying to capture the beauty and power of it. Nathan began his dance career as a street and hip hop dancer in Eersterivier, Cape Town. This is where his love of dance and desire for formal training began. After spending two years at Dance For All’s Bridging Programme, Nathan was awarded a three-year scholarship to train at the Cape Academy of Performing Arts. Ciara also discovered her passion for dance and performance at a very early age. She successfully completed her Diploma in Modern Jazz Dance Teaching in 2012 with the Association of International Dance Teachers, Cape Town and went on to do a three-year performing arts course at the Cape Academy of Performing Arts (CAPA), graduating with a Diploma with Distinction in Performing Arts, majoring in Dance, in 2015.

Joining the programme for this year’s festival is Eastern Cape-born, London-based dancer, Mbulelo Ndabeni. Ndabeni trained at Dance for All, UCT School of Dance, San Francisco Academy of Ballet, and London Studio Centre. Before moving to the UK in 2007, he worked for Cape Town City Ballet. He has performed in and toured with works such as Tread Softly, Comedy of Change, Eternal Light, Four Elements and Roses. Ndabeni’s work has been described as “unique in his mastery of both balletic and Africanist movement” and is a definite not-to- be missed feature on this year’s line-up.