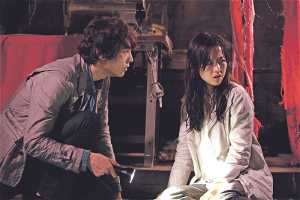 Following the Oscar success of Parasite, Frightfan.tv will screen the best of Korean horror cinema this July 2020. With more terror than ever before on Africa’s first curated transactional video on demand service dedicated to horror, thriller, sci-fi and everything in-between, winter is the perfect time to settle in for your dose of fear on demand.

Created using found footage, Don’t Click is about a forbidden video that curses people to death, directed by Kim Tae-Kyung. The video is revealed to be a series of 108 clips which change content after each viewing. You better not click if you want to survive.

In The Guard Post, which premieres 14 July, directed by Gong Su-chang, a squad of Korean soldiers is sent to investigate a guard post that overlooks the DMZ. Seemingly deserted at first, the squad eventually discovers mysterious corpses and body parts strewn all throughout the post. Amidst the macabre scene they discover one survivor with a bloody axe in his hand, but soon he falls into a coma, leaving more questions unanswered.

Posessed premieres 21 July. After Hee-jin’s younger sister So-jin, who is possessed by a spirit, disappears, the neighbors die one by one and a secret underlying their deaths is revealed.

Premiering 28 July, Gonjinam follows the crew of a horror web series who travel to an abandoned asylum for a live broadcast. They soon encounter much more than expected as they move deeper inside the nightmarish old building.

Moving elsewhere, if you’ve ever wanted to visit Epecuen, Argentina’s underwater town that was submerged under water for almost thirty years, you might think twice after watching Los Olvidados (What the Waters Left Behind). The plot revolves around a group of young people that take a trip to the ruins in order to film a documentary. Ignoring the warnings, and after a brief tour, they get stranded in the abandoned village. Contrary to what they thought, they begin to realize that they are really not alone.

The travels don’t end there. In Inbred, four young offenders and their care workers visit the remote Yorkshire village of Mortlake, which prides on keeping itself to itself. A minor incident with locals rapidly escalates into a blood-soaked, deliriously warped nightmare.

Flight 7500 departs Los Angeles International Airport bound for Tokyo. As the overnight flight makes its way over the Pacific Ocean during its ten-hour course, the passengers encounter what appears to be a supernatural force in the cabin in 7 500.

Additional films coming to Frightfan.Tv this July include The Visions in which a pregnant woman  begins to experience terrifying visions, The Astral that follows a student’s astral projections to connect with his dead mother and Dark Skies, where the Barrett families peaceful suburban life is rocked by a series of disturbing events.

What: Best of Korean horror cinema

How: Films are available to rent for R 25 each for 48 hours from the time of purchase. Fans are encouraged to follow Frightfan.tv on social media for regular updates, teasers and the occasional spoiler.