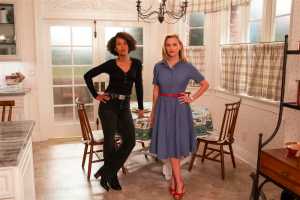 LITTLE FIRES EVERYWHERE. Based on the original novel by Celeste Ng. With Reece Witherspoon, Kerry Washington and an ensemble cast. Showmax.

There is a moment in the final episode of this eight-part series that I will never forget. Elena Richardson (Reese Witherspoon) screams at her daughter, who has just revealed that she is not the perfect child her mother thinks she is. She screams: “Yes, you are.” Three words. Three words that tell the story and show the actress in the most powerful and devastating way.For those three words alone, Little Fires Everywhere is worth watching. It is a moment of shattering screen magic.

I took a while to decide to watch this series, mostly because I loved Reese Witherspoon in (the one season too long) Big Little Lies, and her character here seemed to be a wash, rinse repeat of her previous one – white, privileged, narcissistic, selfish, bully, busybody. I felt sorry for her actually, having to play these two most unlikeable characters in such quick succession. I soon forgot my reluctance and spiralled headlong into this drama with mothers and daughters as its theme.

Little Fires Everywhere is set in 1997, with flashbacks to the 60s, 70s and 80s. It focusses on the lives of the Richardsons, a big, white family of four teenage siblings and their parents, and how their lives are turned upside down by the arrival of enigmatic and unusual, black, single mother Mia (Kerry Washington) and her daughter Pearl (Lexi Underwood). Setting it in the near past provides the opportunity for creating a bit of distance, so the viewer recognises the issues of the day – racism, homophobia, sex, family, class – through a slightly altered lens.

Small town white privilege meets subtle racism and classism, and then rushes into chaos and division when the central characters’ fault lines are exposed.

Mothers, motherhood and what makes a good mother

The theme of mothers, motherhood, and what makes a good mother is explored from every angle, sometimes repetitiously, and sometimes with a sledgehammer instead of a sewing needle, but the twisty, turny secrets, the deceptions and half-truths, the tension and the dribbling out of the back story in bits of flashback make it intriguing and compulsive viewing.

But, for the most part, it is the strength of the performances by Witherspoon and Washington that holds the tension and tragedy of this story together. Some of the complicated and convoluted plotline is not terribly credible, getting in the way of the really good drama of the piece, but the performances triumph, making this a masterclass in acting from the two female leads.

Little Fires Everywhere is filled with real drama and a lot of emotion. If you are up for that, it won’t let you down.