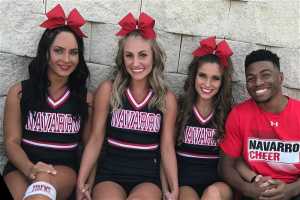 Cheer is brilliant. I got sucked into a world I didn’t know, or care about, and watched six episodes with growing commitment and compulsion. By the end I was hyper invested in the outcome of a group of cheerleaders. I repeat. Cheerleaders. The tension was almost unbearable.

Documentary series are a growing thing, especially since Netflix. Making of a Murderer was how I got hooked and then Wild Wild Country fuelled me. But Cheer is another thing altogether. A group of teenagers, some troubled and broken, one Youtube famous, some black, some gay, are saved by a cheerleading college in Corsicana, Texas. Monica, owner of Navarro cheerleading team and school, and her assistants, train and cultivate a winning team and spend a year preparing the kids for the cheerleading championships in Daytona, Florida. It is intense.

The six-part series builds perfectly. In the beginning we meet Monica, the tough no-nonsense brains and business behind the school. A true small-town Texan, she is everything you expect. She says y’all. She is religious, married with kids, and has highlights and wears boots with heels. She has an office full of trophies. Her school prides itself on winning.

We meet the people she works with and the kids who have already spent a year (one of two) with her. We start to meet the newbies who will be trained and groomed and developed.

Individuals who make up the team

Through each episode, and as the series builds towards the grand final in Daytona Beach, we discover the individuals that make up the team; from Jerry who lost his mother to cancer, to Morgan who was abandoned by her parents and rescued by her grandparents. There is La’darius – all personality and bluster; Alex – troubled teen with a rocky history; Gaby – child Youtube star and famous cheerleader. There are interviews with Navarro alumni and medics and teachers. 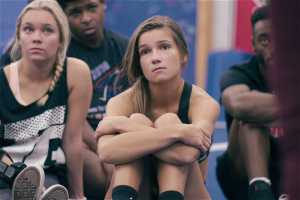 We learn the language of cheerleading; baskets and pyramids and tumblers, and we witness the process of creating discipline, teamwork, buy-in, and devotion. We see pain, and aching young bodies, and fear, and the overcoming of fear. We are challenged by obsessive competitiveness, ego, the overcoming of ego, support, friendship and desperation. It’s hard core.

And before you know it, you the viewer care more about the trials and tribulations of Navarro than you do about Trump’s impeachment trial.

This is a documentary series that delivers tension, characters, location, values, relationships, small town America, shock, religion, diversity, family, conservatism, the rich poor divide. It is the soap opera of documentaries, and it is completely successful. I wonder what a season two would look like …