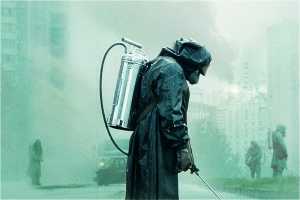 Why, one may ask, would one choose to watch a depressing, harrowing recreation of one of the worst disasters of the past century? And to spend five hours doing so?

Because Chernobyl is really, really good. The series, which is currently screening on Showmax, is a gripping and by all reports, pretty authentic, retelling of the events which took place on and after 26 April 1986. That was when the No.4 nuclear reactor in the Chernobyl Nuclear Power Plant blew up.

Situated near the town of Pripyat in the north of the Ukrainian SSR, the power plant was host to hundreds of workers, and close to thousands of citizens. While the actual explosion of the reactor did not result in huge casualties, the subsequent radiation fallout did. And still does. Chernobyl still remains isolated, restricted, toxic. The death toll due to cancer and related illnesses still remains unknowable.

Again – why would one want to watch this? Perhaps out of morbid interest, like an exhibition on Pompeii I saw in the UK where everybody just wanted to see the foetal-curled corpses? Or from a sense of Schadenfreude?

I’d like to think that people are seeking this series out because it is a courageous cautionary tale, a warning and a tribute all at once. It speaks of an incredible disaster made possible by arrogance and lies. But it also speaks of an even worse tragedy averted by sacrifice and bravery. In a strange way, the series offers hope – for the horror not to recur, for humanity and sanity to prevail.

And people are watching because it is, actually, pretty damn absorbing. The series starts with the explosion, and we are drawn into the action not only by the visual drama, but via individual characters: a fireman called to the scene, engineers in the control room, a family watching the deadly pyrotechnics, unaware that the ash that gently coats them is deadly …

As the reality of the disaster sets in, it becomes a political hot potato as fingers are pointed and culpability denied. But meanwhile, the potential for destruction on a global scale demands immediate, effective decisions.

Who steps up, who steps aside, who denies and who tells the truth all become part of this drama as it plays out across a tense and distrustful USSR, with Mikhael Gorbachev and the KGB keen to maintain face while the scientific, military and even mining sectors are left to save the day and clean up the mess. At massive personal and financial cost. 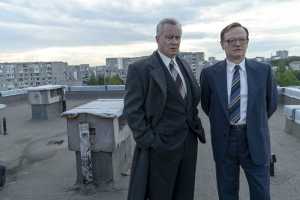 Craig Mazin’s well-researched script and Johan Renck’s senistive direction make this both a fascinating expose and an engrossing drama. There are moments that are unbearable –  if you’re a pet lover you will have to leave the room – and moments that are unbelievable – such as allowing the running of nuclear plants while knowing they are defective and dangerous.

Jared Harris, Stellan Skarsgard and Emily Watson lead the charge, supported by a large and credible cast. The setting (filmed largely in the Ukraine), the costumes, lighting and period styling all contribute to a genuine and uniform look-and-feel.