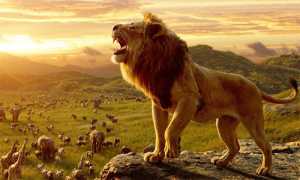 This “live action” version of the Disney’s classic film is a faithful, almost scene for scene, recreation of the much-favoured 1990s animation.

We know the story – little lion cub runs away from Pride Rock after the death of his father, the majestic lion king, but grows up to fulfill his destiny in the circle of life – so most of us are just going to sit back and enjoy the sounds and images.

The visuals are stunning, from the expansive opening sequence with the startlingly familiar Nants Ingonyama Bagithi Baba to the sandy dunes of the desert and the very familiar succulent plants of Timon (voice of Billy Eichner) and Pumba’s (Seth Rogen) oasis home.

The animals are for the most part gorgeous, especially all the little ones – from baby rhinos to tiny, shy giraffes, fluffy balls of ostriches and some very cute lion cubs.

Most of the animals look best when the camera pulls back and you don’t notice the disjunct between the dialogue you hear and the way their mouths move. Creatures like Zazu (John Oliver) the bird, work because you don’t expect mobility of beak, but it is best not to look too closely at the lions when they speak.

Strangely (considering it is from the same director who brought us the amazing Jungle Book recreation) the one thing this film cannot do, which the animated film did so well, is to create that all important connection between viewer and character. Mufasa’s (James Earl Jones) death scene is nowhere near as affecting, nor do you get the mind-blowing sense of the cycle of life when the king talks about the stars to his little son.

Imitation may be the sincerest form of flattery, but a little bit of emotional connection goes a long way to make something that is good, truly great.

It isn’t just that the filmmakers are tripped up by the uncanny valley (the animated animals are startlingly realistic but cannot quite convince because of the fact that their faces are not made for human speech), the voice cast (other than James Earl Jones and John Oliver) are rather underwhelming.

Donald Glover and Beyonce are very restrained as grown up Simba and Nala and Florence Kasumba dials it in as Shenzi.

Take it as a technical marvel and hum along to The Lion Sleeps Tonight, don’t expect to recreate your childhood here. It is cute and watchable, which is more than you can say for a lot of the stuff you are forced to watch for the sake of taking your children to the movies.