The Cradle of Creativity continues apace with no signs of lagging energy and if anything there appears to be a rejuvenation of audiences and theatre-makers alike. 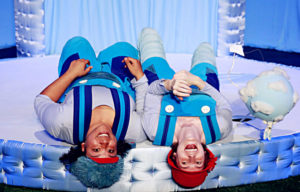 The beginning of the week heralded the business of the Cradle of Creativity as the congress began in the City Hall. Attended by delegates from more than a hundred countries, the first day focused on the past with presentations from the various working groups on the activities of recent years. There are a number of networks which interact with ASSITEJ and each one focuses on the various aspects of creating work and developing young audiences. Tuesday saw plans for the future proposed and bids for the World Congress in 2020 presented and discussed.

This week Yvette Hardie will formally step down as President and a new President and International Executive Committee will lead this vibrant organisation in to another cycle of exhilarating theatre and performance. The long awaited network of dance practitioners gathered this week and bodes well for the future of dance for young audiences. Dance for young audiences is both exciting and terrifying and provides scope for bold and creative projects that one can only hope we will see on our shores soon. 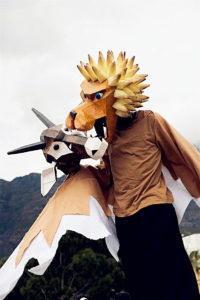 This week the world celebrates Africa Day and the festival will do so with a programme of outdoor performances including large scale puppets from the sky and the sea. Janni Younge’s Firebird will be accompanied by a reticulated shark proving that there really are no boundaries in theatre. Jungle Theatre’s flying lion will stretch your limits of belief in When Lion Had Wings and an installation commemorating the sinking of the SS Mendi will appear alongside a performance from Ndabamnye No SS Mendi. The performances take place in the Centre Piazza and the Theatre Foyer Well at Artscape from 2pm today.

The particular focus on theatre for very young children continues at the Magnet Theatre until 26 May. The fringe festival Rocking the Cradle presents ten different productions, one of which is bound to be suitable for a youngster in your care.

Anna Newell, a recipient of the Tonic Theatre Award for her role as a woman changing the face of UK theatre, ran intensive workshops at Magnet Theatre in 2015. The trainees were so captivated by her work made specifically for babies that the Early Years Company was formed and it has continued to create, develop and perform several shows which have already gained a loyal following. 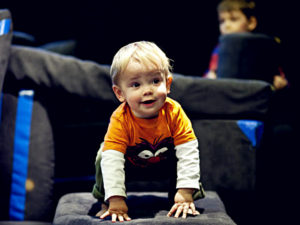 Creating theatre for children under the age of one may seem an almost ludicrous idea but it is possibly one of the most delightful and sincere theatrical experiences I have ever shared.

Babies, together with their caregivers, whether that be their parent or a child minder, are ushered in to a purpose built tent. Three actors engage directly with each of the babies with small objects, twinkling lights and tinkling bells. Not a sound is heard aside from gurgles and the occasional deep sigh of wonder from a parent. This is the essence of theatre, a communal experience of wonder and suspended belief, with a tangible sense of shared imagination. Scoop: A Kitchen Play will provide you with the same opportunity.

The Goethe Institute and Helios have supported the Magnet Theatre Early Years Company to make several shows. AHA! recently returned from the Helios Theatre Festival, Hellwach 2017 in Germany and is sure to have youngsters marvelling at just exactly what you can do with wool. Making use of ordinary objects is also a feature of Knock! where pieces of wood are transformed in to magical creatures, both visually and aurally. Wood takes centre stage in Woodways as well as the local cast are joined by actors from Cameroon and Kenya. This collaborative project is just one of the many that has made this festival so special. Perhaps children’s theatre lends itself more easily to collaborations which bridge cultures and cross language boundaries. Caban ZA, a research performance using musicians and actors is a collaboration between Belgian and South African actors. Personal and collective memories were explored in Our House, a co-production between Ishyo Arts Centre, in Kigali, Rwanda and the German based Helio Theater. The shared experience of genocide and mass murder examined the past and built hope for the future. Patrice Balbina’s Chance Encounter with the End of the World also dealt with the weighty issue of migration. This multi-lingual performance joined theatres from Europe, Canada and Australia in a truly global project, supported by the European Union. 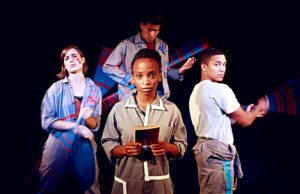 Theatre makers who create work for children are cognisant of the tension between creating theatre that is unadulterated entertainment and work that has a more educational aspect. Many have found the perfect balance and have created performances which are both thoroughly entertaining and from which children can learn. Even a solution for the current crippling drought is to be found on stage. Cloud catcher is a story of hope and determination which follows Buhle, from Langa in her quest to end the drought. Richard Antrobus directs Asiphe Lili in this production which entertains and educates, and given the current water crisis is highly topical. Illicit education is the theme of Jon Keevy’s The Underground Library where books are forbidden in a futuristic world in Johannesburg where hackers and terrorists race towards the truth.

If you are searching for solace or solutions, whether you are a parent of a tiny baby, the aunt of an exuberant toddler or the sibling of a moody teenager, there really is only one place to spend the next few days, celebrating the World Cup of Theatre for children and young people, the very first right here in Cape Town, South Africa.

Where and when: City Hall, Baxter Theatre, Artscape Theatre, Magnet Theatre and cultural hubs around the city until May 27