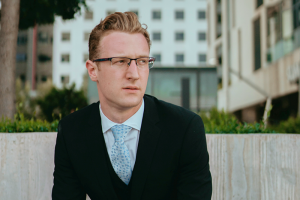 Anger, frustration and surreal beauty, everything that he and most of us feel in this time of Covid-19, is what Beethoven’s Third Piano Concerto represents to Daniel Brodie, says PETA STEWART:

Daniel Brodie (pictured left), just 21, is the Cape Town Philharmonic Orchestra’s soloist in the Huberte Rupert Memorial concert which is being streamed from 16 to 20 December 2021 as the final in the CPO’s Cyber Symphonies in Summer season.  The concert was generously supported by the Rupert Music Foundation.

Daniel filmed it at the Endler Hall on 4 December, with Brandon Phillips on the podium. The other works are the overture to Mozart’s opera, The Impresario, and Schubert’s Symphony No. 3.

“The Beethoven 3rd concerto is a powerful work in every movement and so appropriate for our current times,” he says.

It’s his fourth appearance with the CPO but the first time in a full concerto.  The other times were in the National Youth Music Competition and at the Artscape Youth Music Concert this year. He has also performed in concerto festivals with the KZNPO and the University of Stellenbosch Symphony Orchestra.

“Beethoven has always been central to my repertoire, says Daniel. “I have played more Beethoven sonatas than is perhaps standard for someone my age, purely because I have an insatiable appetite to consume Beethoven. He is so rewarding. I am still discovering new things even at this late stage in my preparation of the piece. I even found myself going to a lesson with Nina (Schumann, his teacher at Stellenbosch University) to tell her of a discovery I had made regarding a thematic link between the first and third movements. The integration of piano and orchestra writing is incredible.”

Daniel embarked on his musical journey when he was eight in East London and his parents were always supportive. “I remember a video tape called Baby Mozart and that was my first exposure, although I still have a love of church organ which comes from my childhood. I seemed to have an affinity for singing. My parents got me a small keyboard and six months later my teacher told them it’s time for a piano. They bought me one and my connection with the piano flourished from there.

“East London was very remote from the world of music. All the big names that came to South Africa went to Cape Town and Johannesburg, but I never knew what I was missing until I went to high school and my teacher, Jacques du Plessis, exposed me to a new musical world. I began to find videos of the big names, and Jacques encouraged me to come to the Piano Symposium at Stellenbosch when I was 16.” That’s when Nina became his choice as a teacher, and he told her so. He came to Stellenbosch each year from 2016 for the Symposium or to participate in the Stellenbosch International Chamber Music Festival.

So privileged to be a musician

In 2019 he started at the Conservatoire at the University of Stellenbosch, embarking on “an incredible journey of transformation.”

Brodie’s not taking an easy path. While most of his contemporaries are playing the field, he got married when he was 20, to a fellow pianist Rosemarie Lemmer who transferred from Pretoria to Stellenbosch, and enjoys horse riding in holidays – something that freaks out fellow pianists.

But the road he is taking is a quest for freedom and that applies to the cooking and baking he does for fun too, for he is an explorer.

“Jacques du Plessis gave me total freedom to express myself and for that I will always be grateful. He never pushed me in to competitions, although I did enter and win a couple like the University’s Lionel Bowman Competition and Mabel Quick Competition in October this year.

“I don’t want to be pushed into a box. I want to achieve full artistic freedom, but don’t ask me what that means quite yet – I still need some time to figure that out. My only aim is to continue learning. Being a lifelong student is important to me, analysing works, analysing interpretations, analysing relationships. I am so privileged to be a musician,” says Daniel.

When: Cyber Symphonies in Summer, concert no 6 on the Quicket platform from 16 to 20 December 2021