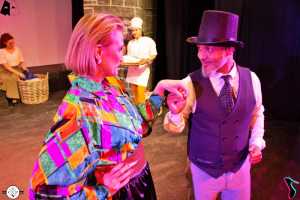 Faeron Wheeler’s amusing up-to-date production and rewording of Charles Perrault’s centuries old fairy-tale sees Cinderella (Erin Gemmel) longing for someone to see her for who she really is. She (rightly) believes there is more to life than being her unkind step-family’s skivvy.  However, her spiteful stepmother Lady Vivianna de Meanface (Erika Marais) and daughters blond Amazonesque Constantinia (Wayne Ronne – he’s a real nasty) and black-booted Narcissistica (Tayla Sargent – she’s a real meanie) are such a thoroughly self-serving trio that ‘Ella’ fears she will forever be a cleaning service to them.

As for Prince Charming (Aidan Lewis) he’s a handsome enough lad with a pleasing voice. But so weak-kneed by his mother the Queen’s (Amy Blanchard) nagging, he lacks the confidence necessary to believe he can find true love from someone who sees him for who  he really is … a kind, loving, gentle Prince Charming.

So low is their self-esteem that when Prince Charming and Cinderella unexpectedly meet, they can’t believe they’ve found love at first sight. Of course, before Prince Charming learns who Cinderella is, the clock strikes midnight and off she dashes – fortunately leaving her glass slipper behind. 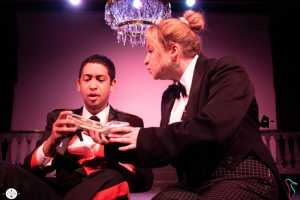 It’s thanks to Herald’s (Tami Schrire) ingenuity and the Fabulous Fairy Godmother’s (Bonolo Moloi) magic that the mean-faced three ultimately get their just deserts and the young couple are happily reunited.

Under present circumstances six weeks is no time at all to put together any musical.  So, I must commend the nine-piece ensemble for being word and foot perfect throughout. Good marks too for efficiently shifting Richard Higgs’ set designs from village square – with its water fountain – to castle ballroom – with its magnificent chandelier.

Unreservedly Moloi deserves her name as Fabulous Fairy Godmother. She is fabulous. Her singing voice pleasing to listen to. She moves with assurance, interacts easily with her audience and I hope to see more of her talent in future Masque productions.

This is Charles Perrault’s famous fairy story told as a musical – do support!

Where and when: Masque Theatre, Muizenberg until 18 December 2021