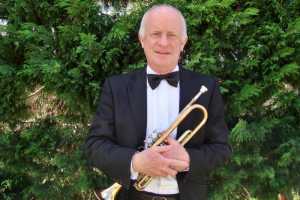 David Thompson (pictured left), principal trumpet of the Cape Town Philharmonic Orchestra, finally capitulated and agreed to perform the Haydn Trumpet Concerto with the CPO under the direction of Bernhard Gueller, which streams as the fourth concert in the season on the Quicket platform from 25 – 29 November 2021, following a curtain-raiser by the CP Youth Orchestra with Brandon Phillips on the podium, says PETA STEWART:

Why did he capitulate?  “This concert is played on an E flat trumpet, one which I seldom play.  It is a fourth higher in pitch than the B flat trumpet I usually play. While I don’t consider myself intrinsically to be a soloist, during lockdown I have had a lot of practice time.

“My colleagues have been very encouraging and I decided that actually it is something I really want to do. While I have never played the complete concerto, I did play the final movement in a concert at Kirstenbosch about 15 years ago with Richard Cock.  It’s the most important work in the trumpet repertoire, as it was the first chromatic trumpet concerto ever written – in 1796. Before that, the trumpet could only play five or six different notes (harmonics), so this revolutionised the instrument in the orchestral role, and made this Haydn the most famous concerto written.”

From trumpeting to running

David has been in South Africa for 35 years, after the Scottish lad, in London, auditioned for an won a position as alternate principal trumpet in the Cape Town Symphony Orchestra. With his English wife, Martine, he came to Cape Town in 1986.  When the orchestra merged with the CAPAB Orchestra he became principal trumpet, and when the CPO was established at the end of 2000 he remained heading up the section.

While the trumpet may be his first love, running is a close second. He has completed 15 Two Oceans Ultra marathons, 41 standard marathons, 96 half marathons and many various other running distances and even in the times of Covid continued to run several times a week, observing lockdown restrictions. He is also a woodworker, having made the conductors’ podium in 1997 that is still in use today. He used lockdown time and designed and his son’s electronics repair work laboratories.  He also made a number of cupboards to rehouse his reorganised tools.

Dave began playing the trumpet at the age of nine, and was taught by his father, a trombonist with BBC Scottish Orchestra. Young David was soon good enough to join the Clyde Bank Brass Band in which he played until he was 17. Apart from studying – he won a diploma with distinction and the Robert Tebb Award for outstanding performance for his Light Music course at Leeds College of Music– he also played in dance bands in the north of England as well as with the BBC Northern Symphony before attending the National Centre for Orchestral Studies (NCOS) in London, where he also received a distinction on graduation. By then he was freelancing with several amateur and professional orchestras and bands as well as the Bournemouth Symphony Orchestra.

In Cape Town, he and his American brass colleagues formed the Solid Brass Quintet which, in its fourteen years, played recitals, tours and educational school concerts, including establishing the annual Brass Congress, with much success. Around 1995 Solid Brass and Amampondo joined forces to form the ensemble Intsholo, creating a unique mix of Western and African musical cultures. This ensemble was invited to play in Atlanta, Georgia during the 1996 Olympic Games, billing with Ladysmith Black Mambazo. Intsholo travelled to Oslo for a short tour; staged a musical show at the Baxter in Cape Town called “A crash of culture”’, and released an Intsholo CD.  He also plays in the Jonny Cooper Orchestra and Mike Campbell Big Band from time to time and is a member of the CPO Brass Quintet.

David teaches trumpet at UCT, and put his teaching skills to good use during lockdown when he mentored the young trumpet players in the Cape Town Philharmonic Youth Orchestra and Youth Wind Ensemble preparing them for concerts.

He is delighted that his concert was the second one to be opened to the public, for even a small audience of 150 changes the dynamics in the hall.

“The mood is so different. The audience responds to us and we respond to the audience.  We are also able to have more people on the stage which means that we can player larger works and I have missed that. Not all smaller symphonies have brass in them. The first concert, the Allan Stephenson Memorial, reminded us that life will get back to normal. It’s too early to have those after-concert receptions where the musicians and  the audience mingle but hopefully that won’t be too long off.”

David is one happy musician. “Playing in a symphony orchestra has led to many other opportunities and this solo concerto appearance is really a high point for  me.”

What: David Thompson with the CPO

When: Cyber Symphonies in Summer, Concert no 4 on the Quicket platform from 25 – 29 November 2021