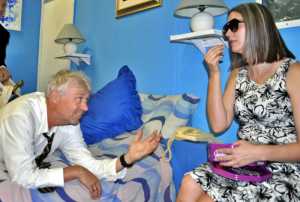 Opposite to “all good things come to an end” is “so do all bad things.” And while its accepted that the depressing Covid-19  lockdown era is not yet over, easing of restrictions has brought some cheer back into our lives.

Especially welcome is the opening up of Cape Town’s arts scene. In recent days I’ve been fortunate to have attended concerts in Stellenbosch, the Baxter, and SANDT’s aptly titled It’s Beautiful at the Ballet at the Theatre on the Bay. Saturday morning I attended Fine Music Radio’s AGM in the Artscape Opera House and, in the afternoon attended Derek Benfield’s fun filled Bedside Manners at the Milnerton Playhouse.

Each event brought me much pleasure and from the relaxed happy chatter around me, I guess patrons felt similarly buoyed up.

But lets talk about Bedside Manners. It’s a typical bedroom farce, studded with witty innuendos. Master deliverer of these is Ferris (Dirk Jonker). He’s possibly the most agile, camp hotel manager ever to hold that position as he, with excellent split second timing, dashed up one flight of stairs, down another, charged in one door and out another plying  alcoholic beverages in vain attempts to keep his four guests meeting.

Bedside Manners is a hoot

Bedside Manners begins with Roger, in the hotel’s green bedroom, and Geoff, in the blue bedroom, awaiting their weekend “dates” arrival. Both, in a high state of nervous anticipation, are fussing about their appearance and body odours. Geoff especially is nervous.  He has “never done it before with a married woman.” Neither has Sally – Roger’s glamorous weekend girl – “done it with a married man.” Attractive Helen, obsessed about remaining incognito hides behind outsize dark glasses, and for security clutches her  Quality Street chocolate tin. Helen, a chocoholic, eats sweets to release her stress.

Apart from saying the script could well be trimmed by five to ten minutes, Bedside Manners is a hoot. It’s impeccably directed by Johann van der Merwe, and well acted by the quintet, but to tell more is to spoil the story’s development.

Much of the fun is due to Fin McCormick’s talents as set designer. Adapted from the original, McCormick’s multi-level design incorporates two bedrooms, two stairwells, a receptionist’s desk as well as the prerequisite doors that make the lovers’ hide-and-seek shenanigans possible.

Where and when: Milnerton Playhouse until 4 December 2021