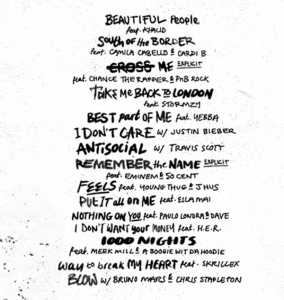 The new Ed Sheeran Beautiful People track features Khalid. It’s being released with the official video – the third track he has revealed from his No.6 Collaborations Project LP, set for release on 12 July, 2019.

The sure-fire summer anthem is produced by Shellback, Max Martin, FRED and Ed Sheeran. It spotlights the importance of staying true to yourself. The tongue-in-cheek official video, directed by Andy McLeod, follows a happy couple who are dropped into a world of excess and high glamour, yet don’t feel compelled to fit in with their new surroundings.

Ed Sheeran says – “Khalid’s got an undeniable, soulful voice and I knew he would be perfect for this track. I think we both connect to the song in the same way and I’m really happy we got to work together.”

Sheeran’s comeback I Don’t Care track maintained a seventh week at No.1 in the UK. It has now surpassed 800 million global streams.