The eighth Education Africa International Marimba and Steelpan Festival features almost 90 schools and institutions at St Dominic’s Catholic School for Girls in Boksburg on 27 and 28 July, 2019.

“With over 2000 participants it will see with kids travelling from as far as Zimbabwe, Botswana and Nigeria,” says Joan Lithgow, Marimba Specialist and Director of the International Marimba and Steelpan Festival.

“Education Africa launched its International Marimba and Steelpan Festival in 2012 to create an awareness of the educational value that marimba playing has, while also creating an international platform for our marimba and steelpan players in South Africa to perform on,” she adds.

The event has become one of the largest of its kind in the world and takes place annually in Boksburg over two days. It is fully inclusive and caters for people from all walks of life including deaf and special needs bands.

“500 disadvantaged children are also being looked after over the weekend, with The Festival sponsoring meals, some accommodation and transport,” says Lithgow. 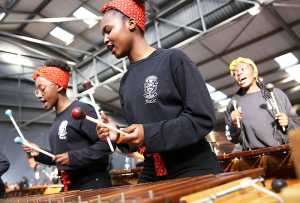 The festival comprises six sections for Primary Schools, High Schools and Open Bands split between small and large ensembles and within each, a number of categories include Battle of the Bands, In the Mix, Strictly Classical and Proudly South African/African Prestige Bands.

“We look forward to another spectacular weekend of incredible music, learning, friendship and camaraderie,” concludes Lithgow