OLEANDER CAIRNS caught Nils Landgren and the Funk Big Band in Makhanda, and found it, quite simply, funky as hell: 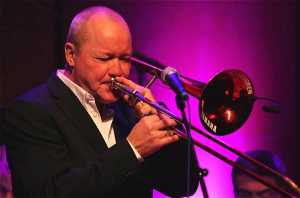 Herman Melville once said, of Queequeg, “he looked like a man who had never cringed”. But Melville might as well have been speaking about Nils Landgren, the celebrated Swedish trombone player who conducted the Funk Big Band at the National Arts Festival 2019.

In spite of his international stardom, Landgren was confident without being arrogant, and the pleasure the other musicians took in working with him was obvious, as they sat nodding like those wooden birds sometimes sold at traffic lights. Landgren appeared on stage dressed in a waistcoat and jacket, with rings in his ears; raised his fist, and began to play his red trombone. The music that emerged was, to put it simply, funky as hell.

One of the high points show was a really gorgeous version of Marvin Gaye’s “What’s Going On”. Landgren sang, and the audience participated in call and response. Landgren made the occasional adjustment to a lyric, straight faced, which gave us a glimpse of his wry humour (“but who are they to judge us, simply because my hair once was long?”). Most of the other songs were groovy reworkings of upbeat hits, like ABBA’s “Super Trouper”. But there were slower numbers too, including Landgren’s composition “Julie”, and the mournfulness of a trombone is not to be underestimated. 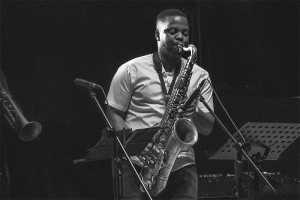 The audience was treated to a great many excellent solos and a review is simply too short a piece to do each of these 18 musicians justice. But I must mention drummer Kevin Gibson and bassist Shaun Johannes specifically, who worked tirelessly in the musical engine room of Nils Landgren and the Funk Big Band to ensure that everything ran smoothly and on time. The other solos which stood out for me were by Sisonke Xonti (pictured right),  in “House Party”, and Shannon Mowday in “Mercy, Mercy, Mercy”. Though there was some emphasis placed on the variety of the musicians’ geographical origins, the band was far less diverse in terms of gender, boasting only two women players.

Before the show began, the MC noted that big bands the world over are dying, but it seems the hunger for them lives on, at least in Makhanda. The audience was standing, singing, and dancing by the end.