The Mother of All Eating is a new play by Luntu Masiza and Nhlanhla Mkhwanazi, directed by Chris Weare, and presented at the Drama Factory. 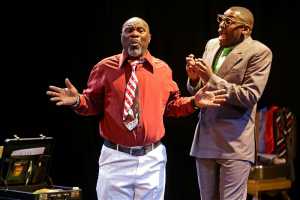 Recently featured on the Main Stage of the National Arts Festival, The Mother of All Eating is a satire by Zakes Mda. The play explores the debilitating culture of corruption and greed known as “eating”. The culture has become synonymous with corrupt state officials who enrich themselves by abusing government funds.

Set in Lesotho the 1992, the play exposes the catastrophic effects of greed and the tragic effects that accompany unchecked corruption. With crafty direction by Chris Weare, Luntu Masiza and Nhlanhla Mkhwanazi become a parade of rogues in a tragicomedy that bites close to the bone.

An actor who has trained both locally and internationally, Mkhwanazi is a respected and admired performer, writer, composer, choreographer and theatre-maker. He is known for the many theatre performances and educational programmes that he has devised. A Fleur du Cap Theatre Award nominee for his performances in Cattle Drive and A Man and his Dog, his extensive list of credits also includes Orfeus, The Bird and Cry, The Beloved Country. Mkhwanazi has toured the SADC regions, as well as the United States of America, England, Europe and Asia, performing and facilitating theatre workshops. He has helped build four theatres and worked with many of South Africa’s premier theatre companies, including Theatre for Africa, FTH:K, Third World Bunfight and Artscape.

LUntu Masiza has won several awards for his role in the Fugard/Kani/Ntshona play The Island, directed by Chris Weare. The Island was recently staged at the National Arts Festival, with Luntu Masiza and Siya Mayola wining a Standard Bank Ovation Award. While in the UK, Luntu Masiza was involved in training programs such as the Director’s Course at the Young Vic Theatre, The Soho Theatre Writers Lab and a training programme run by the BBC. Ubudoda, written, directed and starring Masiza, was redeveloped as a full-length play and featured in Baxter’s Zabalaza Festival 2016.

What: The Mother of All Eating