Encounters Fest 2020, Africa’s leading documentary festival, will be making almost all films on the programme free-of-charge to view on virtual platforms from 20 -30 August 2020. 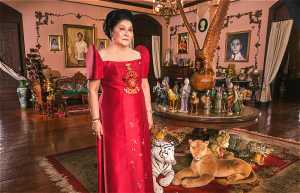 Long-awaited political documentaries and an eye-opening look into the world of one of the  most mysterious artists are just a few of the exciting releases at Encounters 2020.

War documentaries, intimate portraits of great artists, and all new premieres from Africa and South Africa are also among the first films announced for the all-new, online-platform edition of the festival.

The Encounters 2020 festival premieres with the first South African screening of the highly-anticipated political documentary Influence — a profile of ‘morally slippery British reputation manager’ Lord Timothy Bell of British PR Firm Bell Pottinger. The powerful film, directed by South African investigative journalists and filmmakers Richard Poplak and Diana Neille, has been causing a stir at documentary festivals around the world. More great political documentaries include The Kingmaker (pictured above), by director Lauren Greenfield which unveils the shady political career of the notorious Imelda Marcos, the former Philippines first lady who, together with her husband, reigned over the country with an iron fist while pillaging its wealth.

Highly-anticipated international releases will also take audiences on a journey around the world’s best documentaries. Banksy Most Wanted by directors Seamus Haley and Laurent Richard tells the story of the world’s most famous graffiti artist, beginning with the now-notorious Sotheby’s auction in which Banksy’s most iconic work, Girl with a Balloon, was instantly shredded by a mechanism in its frame just seconds after the auction hammer fell. Providing an account of the artist’s rise to fame, while documenting the various forensic investigations that have attempted to solve the mystery of Banksy’s true identity, the film is an art documentary at its most engaging.

In the Oscar nominated and BAFTA-winning For Sama (UK/Syria), journalist Waad al-Kateab and filmmaker Edward Watts give a powerful account of the war in Syria and the systematic destruction of Aleppo from a woman’s perspective. Gaza by directors Garry Keane and Andrew McConnel also focuses on  the region to document the richness of the culture that exists amidst that violence. And in Advocate by Rachel Leah Jones and Philippe Bellaïche the film looks at the inspiring life of Jewish-Israeli advocate Lea Tsemel, who has worked tirelessly for nearly 50 years defending Palestinians against charges laid by the Israeli state.

Some of the world’s greatest artists and literary figures are being celebrated at Encounters 2020. Toni Morrison: The Pieces I am by Timothy Greenfield-Sanders explores one of the most important writers in modernity with a series of in-depth interviews. Commentary from the likes of Angela Davis, Oprah Winfrey, Fran Lebowitz, Hilton Als and others brings a different dimension to the film. Cunningham by Alla Kovgan looks at the work of avant-garde dancer Merce Cunningham by blending recreations of Cunningham’s landmark works with rich archival footage garnered from over three decades.

Viewers can look forward to a diverse selection of some of Africa’s best films. In the Days of Cannibalism director Teboho Edkins reveals the expanding Chinese presence in poverty-stricken rural Lesotho.

Kenyan director Sam Soko explores corruption in Africa in Softie, which premiered at Sundance, and illustrates the extent of political interference in Nairobi through the eyes of Boniface Mwangi — who is Kenya’s top photojournalist, anti-corruption campaigner and human rights activist.

Mother to Mother by Sara CF de Gouveia beautifully dramatises the novel of the same name written by Sindiwe Magona about the murder of Amy Biehl. Featuring South African singer, actress and playwright Thembi Mtshali, Mother to Mother is engaging, thought-provoking and deftly constructed cinema. The highly relevant Finding Sally tells the incredible story of a 23-year-old woman from an upper class family who became a communist rebel in the 60’s with the Ethiopian People’s Revolutionary Party in a time when Ethiopia was on the brink of  revolution

More films will be announced.