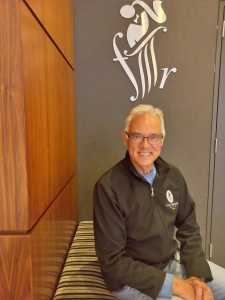 On 1 July 2022, Eon de Vos (pictured left) joins Fine Music Radio as the new station manager. He takes over the reins from Mark Jennings, who is moving to the United Kingdom. Fine Music Radio is Africa’s only classical and jazz FM radio station – playing the world’s most beautiful music. As a community station, it’s run by a core professional team and a large number of volunteers.

“Mark Jennings has been our manager for seven years,” says Fine Music Radio Chairperson Johann Vos. “Although every year presents its own challenges in terms of management, the challenges of the past few years, since the world was confronted by Covid-19, are unequalled. Mark and his team, however, through focused hard work and the loyal and unparalleled generosity of our listeners, made sure that FMR survived. For this, and for balancing the combination of classical music and jazz, as well as the important harmony between the handful of permanent employees and the many selfless volunteers with whom we are blessed, we honour Mark.”

In turn, Jennings has been quick to sing the praises of his successor. “Eon de Vos has been a volunteer at FMR since 2021 and a loyal FMR subscriber for a decade. Eon brings a wealth of management and leadership experience to FMR. He is well placed to take the station to the next level.”

On air and in the air

Eon became a household name on South African radio and TV, earning his spurs on a wide variety of shows over many years. On radio he started broadcasting on Radio Highveld (later Highveld Stereo) and then moved to Radio 5 (now 5FM) as a drive-time jock. Among a number of management positions, he was MD of Highveld Stereo and founder MD of Classic FM in Johannesburg. (He led the team to win the licence bid for Classic FM at the first IBA hearings.)

Eon’s passion for aviation led to him winning several South African Aerobatic Championships, starting SA’s first-ever ENG (electronic news gathering) operation with helicopters and flying for the SAAF Volunteer Air Squadrons, and a successful airline career – from which he recently retired as a senior captain.

Johann Vos says, “We are very excited about the appointment of Eon de Vos as the new station manager of FMR, with his vast experience of radio in particular, and media involvement in general. We are grateful and proud to welcome him on board – a term which he, with his many years of experience as a pilot, must have heard more than most other people. Eon is only our fourth manager in 27 years, and we are confident that, with him as our manager when we complete the first 30 years of our existence as the unique Fine Music Radio, he will lead the station into its next decade.”

Eon de Vos says, “It’s an honour to take over a station that has successfully created a very devoted community, and I truly look forward to working with our dedicated volunteers and staff. Mark and I are working closely together to ensure a seamless handover – and frankly,” he smiles, “to make it easier for me!”