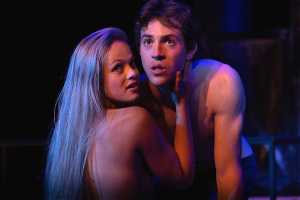 Despite a multi-person cast, Equus is very much a two-hander in terms of the intensity between its central protagonists. The script features a dynamic energy between the duo onstage, demanding absolute immersion from each actor. It’s probably fair to say that if one of them is weak, the whole play will suffer.

Which is one reason, of many, why this 2019 production of Equus is superb. The casting of Graham Hopkins as the consummate but conflicted Dr. Dysart, and Sven Ruygrok as his troubled patient Alan Strang, is outstanding. Both bring to their roles a plausible vulnerability that is thought-provoking and moving. As respective representatives of a (supposedly) sane medical system and an insane home-grown religion, the journey each person takes to the play’s chilling conclusion sees beliefs strengthen and falter, and passion flare and stumble. Each respective actor here is masterly in his role.

Shaffer’s Equus has become a classic, a psychological thriller based on a true event which brings into question issues of faith and worship, an intellectualism framed within an erotic, muscular narrative. Written in 1973, it was inspired by the case of a 17-year-old boy who blinded six horses in a stable near Suffolk. Shaffer’s treatment sees the teenager brought to an eminent child psychiatrist to try and work out why he did it. In the play, we meet the magistrate who seeks treatment for the boy, we meet his parents, and later on, a young girl who is attracted to him. The story is largely told either through the psychiatrist Dr. Dysart’s experiences, or the fevered dreams and recollections of Alan Strang. At its heart, it is a tale pitting dry, dusty but acceptable norms against sweaty, passionate but unacceptable beliefs. It’s about swapping a stallion for a scooter. 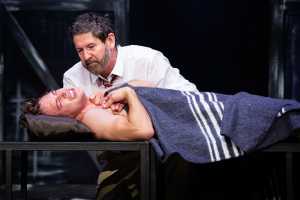 Hopkins is startling in his eloquent, world-weary portrayal of a man who increasingly questions his role in “normalising” patients at the cost of their humanity. Opposite him, Ruygrok’s Strang is a curious mixture of hurt and heat, confusion and clear-cut obsession. Again, a mesmerising performance.

The rest of the cast are all engaging, notably Maggie Gericke as Dora Strang, Alan’s religious mother, Andrew Roux as Frank his atheist Dad, and Cassandra-Tendai Mapanda as a convincing magistrate.

The design, by Marcel Meyer, is simple but very effective, with six stable doors providing a somewhat haunting backdrop. And then the horses – particularly Nugget (Len-Barry Simons) – drawing the eye, combining a lithe grace and Marc Goldberg’s stylish choreography with minimalist costume touches (head and hooves) to utterly convince and captivate.

Take a bow, director Fred Abrahamse and team – this is a fresh, poignant, startling and chilling production. It’s really, really worth going to see.