FAMILY SECRETS. Written by Enrico Luttman. Directed by Alan Swerdlow. With Dorothy-Ann Gould and Sven Ruygrok. Theatre on the Bay. 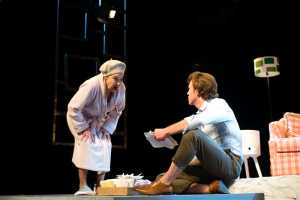 There are various ways of dealing with pain, whether physical or psychological, and the flippancy with which Enrico Luttmann treats this topic makes the theme of Family Secrets unexpectedly piquant without in any way diminishing its poignancy. Apart from the acerbic wit of its dialogue, the play further eliminates any sentimentality by its clever assimilation of soap-opera (or television novella, depending on its ending or lack thereof) into real life, raising the question: does serial entertainment imitate life, or do we experience life as it if were an ongoing work of fiction?

The set suggests much even before the action begins, with lights evoking an arena for filming soapies, and domestic areas of a household arranged as if they were units devised for players to enact episodes of a drama. There is a neat structure to the work, created by a preface and an epilogue spoken by the same protagonist to frame this harrowing, occasionally comical journey which a mother and son undertake at a time of family crisis. 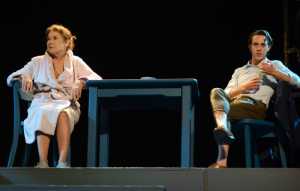 The chief strength of this arresting production is the stellar quality of its leads whose chemistry appears totally unforced, their interaction by turns hilarious and heart-wrenching but always plausible thanks to impeccable timing ensured by Alan Swerdlow’s direction. Dorothy Ann Gould, as the volatile and articulate Grazia, penetrates the complexity of her persona with insight as she enchants and at times appals her audience with outbursts of mind-blowing vulgarity; Sven Ruygrok’s Adamo (her son) counters this turbulence with a restrained but equally powerful performance to win the hearts of spectators.

As we progress through an agenda of grudgingly acknowledged deceit, insecurity and guilt common to both characters to reach a life-affirming resolution and inner peace, one has the impression that this is not so much the ironic recreation of a soap-opera-type family drama as an intelligent, quizzical look at human frailty. As such, it is both original and engrossing, perhaps more for the head than the heart. A theatrical gem. 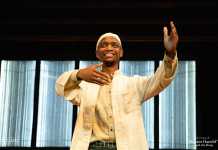