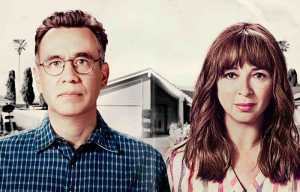 I signed up to Amazon Prime and Forever was the first thing I watched. It’s an odd, yet charming and sad eight-part series made in 2018, that has a weird resonance with here and now that was obviously never intended. I liked it enough to write about it, which is good, since I haven’t been able to muster up writing enthusiasm for a while.

Forever is about married couple June and Oscar who are drearily, mundanely ordinary. Then, within a year of each other they die and find themselves in an alternate suburbia in the afterlife where their relationship, values and desires are questioned and re-examined.

This series is so odd because it creates a totally credible and boring afterlife and then presents the most unlikely scenarios as fact. Dead people live in an abandoned suburb, they cannot be seen by the living, and they remain the age they died at.

Everything about this place is strange and totally boring; the same with June and Oscar, brilliantly played by Maya Rudolph and Fred Armisen. And it is also really creepy, very familiar and even uncomfortable at times. Then, in contrast, it has moments of delicious comedy, lovely dialogue and a light frivolity that is surprising.

The styling of Riverside (the dead people’s suburb) is gorgeous. Very seventies, Scandi, split level architecture and décor. The attention to detail with all the costumes and props is delightful, and everything about the impossible is oddly believable. This could so plausibly be where middle Americans end up after dying.

There is also a really odd, whimsical and totally unexpected soundtrack that I loved. One fun thing about Amazon Prime that I discovered is that if you hover over the episode with your cursor, info comes up about the actors, trivia, music and other bits and pieces.

The episodes of Forever are short, making it a really easy series to binge watch.