OurSalsaSoulRadio gives you 50 reasons, and counting, to get up and dancing all day long, writes DEBBIE HATHWAY.

Music makes us stronger. This social media post by OurSalsaSoulRadio (OSSR) hit home. Since I’ve been tuning in to the station, my mood has brightened substantially. My mobile phone is full of reminders for my favourite shows (a habit I may soon break as they’re all so fabulous), I’m attempting to write with the music still playing (when usually I need silence), and I’m attending online dance classes in the middle of the night because the UK schedule is two hours behind South Africa. Listening to music and dancing – two things I have not indulged in the last year.

How did I discover it? Through Julian Mr M, a DJ, dancer, teacher, MC, who I met at the Joburg Afro-Latin Festival in 2020. That same month, OSSR was set up as a lockdown project by Del Salereo and Sofi Cook in London. Both salsa dancers and DJs, they were already co-hosting the Cuban salsa show, Villa Cubana, on another radio station and wanted to create something that would give dancers a platform to connect and listen to music in quarantine. 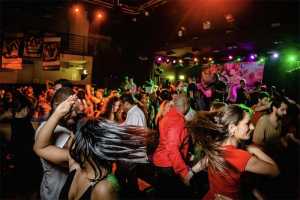 “Dance is so much about community, and social dancing, teachers, promoters and DJs in the UK and other countries were hit badly by the Coronavirus,” says Cook, Salereo’s co-host on OSSR and head of recruitment. “Knowing the scene, in quite a short space of time, we were able to recruit dozens of DJs, bringing Latin presenters together with their jazz funk and soul counterparts to create a 24/7 station with the motto – ‘with the dancer in mind’. We’re currently filling the night-time slots with DJs increasingly joining from other countries.”

OurSalsaSoulRadio is not just a British station. It has presenters and listeners worldwide, from the US, Spain, Russia, Portugal, Cuba, South Africa and many more, who interact in the chatroom to the great amusement of all involved. In the last few weeks of chatroom shenanigans, I’ve been sharing the love with people from Russia, Sweden, Stockholm, the UK, Belgium, Finland, Edinburgh, Colombia, Macedonia, Romania and Scotland. I even “attended” 16 hours of Julian Mr M’s 24-hour nonstop music marathon to celebrate his January birthday, which he migrated to Mixcloud after his OSSR set was over.

The DJs and volunteer marketing team have been generous in giving their time and the vast majority are dedicated to staying even after lockdown. The list of presenters includes many top DJs, who are world-famous in their genre. OSSR DJs Moe Flex and Julian Mr M were both at the Joburg Afro-Latin Festival last year as were UK dance luminaries Robert and Jean White of MamboCity fame.

There are currently around 50 DJs sharing their passion on the OSSR airwaves, spanning the salsa, Cuban, bachata, kizomba, Afrobeats, jazz funk, soulful house, broken beats and soul genres. People can tune in via the website oursalsasoul.com, on iOS and Android apps, Alexa, and watch many of the shows on Mixcloud too. The team hopes to get a DAB (digital radio broadcasting) license in the future.

The chatroom on the website allows listeners to chat to the presenters live, request songs, send messages and shout-outs to others anywhere in the world. “We get a Iot of messages from dancers and music lovers saying that it has really transformed lockdown for them and is helping them feel sane and connected,” says Cook.

Anyone can get involved

The beauty of OurSalsaSoulRadio is that anyone can get involved for free, from anywhere in the world, any time of day or night, and connect with likeminded people. “I want to extend a huge welcome to our many newbies who have innocently stumbled into our chatroom totally unaware of quite what to expect… and have somehow found themselves hooked by the infectious friendly vibe,” says OSSR marketing support lead Niamh O’Shea.

I know the feeling…

“The chatroom has become an invaluable hub to get together with others who have a similar love for music and a longing to be back on the dancefloor amongst friends, whether its salsa, kizomba, soul, RnB, etc.” says O’Shea. “Listeners and presenters from all over the world are hanging out in the chatroom 24/7 offering positive energy, support, an occasional shoulder to cry on, and an immense amount of cheeky banter and bundles of laughter. It has quite literally been a Godsend during these tough times when so many of us feel so isolated.”

If you tune in to Julian Mr M’s Bachata Paradise show, you might be lucky enough to catch his telenovela. I did, on his birthday – 12 songs brilliantly played in sequence to tell a story that he duly translated for us. Yesterday, Super Dixon shared a fascinating insight into Gumbé (Guiné Bissau) as well as Kompa and Zouk from the French Caribbean, while today Dave Hucker started his set with music by Ismaël Lô from Senegal and Les Amazones de Guinée, an all-female band from Guinea, and followed up with bands from Cuba, the Congo, Panama, and the Caribbean to name a few.

OSSR is an education, a lifeline, and the kind of entertainment that might encourage you to end your Netflix subscription. There’s really not enough time to dedicate to both. Tune in at oursalsasoul.com and like the Facebook page. You’ll never want to leave.