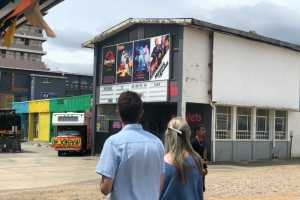 The recently launched GoDriveIn Movie & Roadhouse venue in Cape Town has upped its offering with the introduction of food trucks, a morning goods market and from end November 2020, a high end Virtual Reality and gaming arcade.

The drive-in, situated in an open-air lot in Salt River has capacity for fifty cars and operates three nights a week from Fridays to Sundays. Movies are projected onto a permanent, solid nine-metre screen and film sound is shared into cars via an FM transmitter.

The film offering at the GoDriveIn is diverse and caters to families, adults and film buffs. Ten food trucks complete the roadhouse vibe and moviegoers arriving before the screenings can choose from curries, boerie rolls, burgers and hotdogs, wraps, toasties, pizza, chicken wings and coffee. Aside from movie nights, the food park will also operate daily on Tuesdays to Saturdays from 9am to 5pm. The goods market, where traders sell from the boots of their cars or from informal stands, is open on Saturdays only from 9am to 2pm. 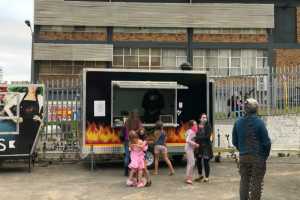 GoDriveIn was established in October 2020 by Grant De Sousa and Tyrone Rubin, both very well known in the South African film industry. An almost forgotten part of the cinema industry,  the drive-in culture is making a comeback globally, driven in part by the temporary closure of so many movie-houses worldwide in the face of Covid-19. Cape Town is no exception and with the local GoDriveIn offering being as layered as it is, the venue has morphed into a popular entertainment destination attracting people of all ages.

“GoDriveIn has a life span that extends beyond the pandemic and the drive-in roadhouse is the first phase of our exciting vision for the space,” said de Sousa. “GoDriveIn is also one of the best and safest ways to get back out into the world of real-time, real-life fun- locals and holiday makers love it,” he concluded.

Where: 346B Victoria Road in Salt River

When: On drive-in nights doors open at 6pm and movies start at 8pm

Tickets: Tickets can be purchased online and at the entrance and vary in price, starting from R110 per person for two in a car, R100pp for three in a car and R80pp for four in a car. All prices and movies are listed on Webtickets

Sound: For those without a car radio, FM radios can be hired for R75 a unit