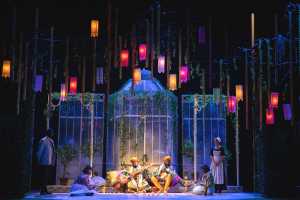 “An exquisite production on all counts” best describes this first post-Covid-19 offering from Cape Town Opera and the UCT Opera School at the Baxter Theatre, where the stage is ideally suited to a work of intimacy rather than spectacle.

Director Steven Stead judiciously balances the antithetical elements of light and shade that often lend a distinctive, thought-provoking ambiguity to Mozart’s works: their subtle interplay is apparent in both the visuals and the moods of Così fan Tutte, in the contrast between sunshine, sparkle and illusion on one hand, and darkness, anguish and disillusionment on the other. This becomes a metaphor for innocence and its loss, a shrewd comment on human frailty.

In Così, everything is manipulated by the cynical aristocrat Don Alfonso, abetted by the streetwise maid Despina. In the hands of this calculating pair, the four young lovers whose journey we follow through the opera are as putty, and despite the obligatory happy ending, one questions whether all is truly sweetness and light at final curtain. 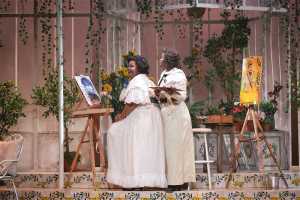 Images accompanying the lively overture give an inkling of what lies ahead. They trace an excursion through formal gardens in which the serene grace of antique statues coexists with gaping monsters and depictions of lewd behaviour…

Michael Mitchell’s enchanting sets evoke the lazy elegance of the Edwardian age before WW1 and the Spanish Flu changed that world forever.

Costumes are equally suggestive: the girls in virginal summer white, their latent sensuality only surfacing in private with the bolder shades of their déshabillées; their fiancés off to war in crisp khaki, then extravagantly costumed as exotic Albanians; Alfonso suave, impeccably formal at all times and enigmatic.

As for the performers, Brittany Smith steals the show as Despina, milking her role for all it’s worth. Venal, resentful of privilege and ever-resourceful, she delights both as character and vocalist, injects comedy into the proceedings whenever she appears, and sings with easy confidence.

Her employers, Dorabella (Siphokazi Molteno George) and Fiordiligi (Nombulelo Yende) are neatly differentiated, their personae attacked with engaging authority by both singers. Yende is particularly impressive when emotional rendition is demanded, for instance in her extended aria after nocturnal seduction by Ferrando. 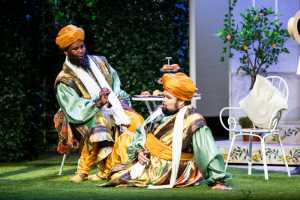 Naive, ardent, and just as flawed as their fiancées, Ferrando (Keanan Mitchell) and Guglielmo (Siphe Kwani) somehow contrive to remain convincing throughout a wildly  implausible plot.

Kwani has a commanding stage presence as well as unforced, resonant delivery – both major assets in a male lead. Mitchell’s intelligent grasp of his role provides a useful foil for his fellow lead.

One regrets that Don Alfonso does not appear more often, since Yonwaba Mbo, who fills this role, is blessed with an opulent voice and the thespian talent to give plausibility to his portrayal of a man considerably older than himself.

The baton of Maestro Jeremy Silver marries vocal and instrumental performances with customary energy and commitment, the latter quality imparting a special intensity to all participants in this rewarding production of a masterpiece.

Find out more: Behind the scenes of Cosi fan Tutte