CAN Music invites you to a series of gqom, amapiano and hip hop fundraiser events at Harrington Street in Cape Town from 4 June, 2022 from 8pm to 4am.

The gigs, on the first Saturday of each month, serve to showcase the best emerging talent in Cape Town and to raise funds for Climate Actions Now program, CAN breakfast club. 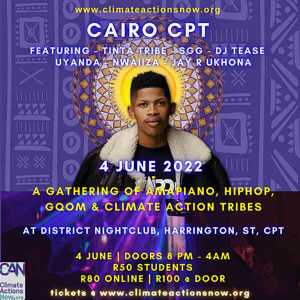 Cairo Cpt is the first headline act, with an introduction to TinTa Tribe from Siqalo. TinTa Tribe aim to produce songs that touch people’s hearts and minds. They just released their first single and music video Yek’ugowa, meaning “stop stressing”

SGG (Shaun Musungate) is regarded by some to be one of the most impressive young rappers in SA, with his single African Boy due for release with CAN Music on the night of the event.

CAN is also delighted to have DJ Tease, Uyanda (deep house), Nwaiiza (gqom) and Jay R Ukhona as special guests. The evening will start at 8pm with a free social networking event, where young people from all parts of Cape Town, who are active in the Climate Actions Movement can come together to socialise and network.

This event is open to anyone who wants to make a difference around this existential issue.

What: CAN Music gqom, amapiano and hip hop Saturdays in Cape Town
When: 4 June 2022, 8pm to 4am.
Where: Harrington Street in Cape Town
WS