It’s the last day of the The Plant Powered Show at the CTICC today writes MEGAN CHORITZ. The gathering features numerous foodies and endless delights.

This vegan was literally beside herself. I felt like I was in an altered state.

Yes, trying to find P5 parking lot at the CTICC took us forever, and yes, we had no idea about how that particular parking worked, and we were clearly not the only ones who had no idea whether we were coming or going, but once inside the expo hall everything changed.

Just through the doors we sampled vegan churros and I immediately wanted, no needed, more. Just beyond that I saw, from the T-shirts, two reps from Vegapro, the vegan dog food my dogs know and love, and stopped for a chat, the first of many, many chats, and so it was we were at the Plant Powered Show for almost four hours! 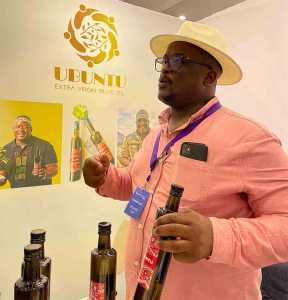 I picked up a media goodie bag and didn’t even get a look inside before being stopped in my tracks by another moment of pure vegan, gluten free, sugar free deliciousness – a peanut butter cup by Tamsin Snyman of @plantbasedcreative.

But the deliciousness and conversations came thick and fast. We stopped to take a look at Lilly Loompa upcycled homeware, and were charmed, particularly their innovative Africa shaped lap desk.

We had a brilliant chat and tasted local, indigenous green plants that were utterly surprising, all grown and cultivated by the extraordinary farmers from the Phillippi Agrihub, then we marvelled at Loyiso Manga’s Ubuntu Olive Oil, which can now be found at Woolies.

I got over excited at the Butta Nut stall after tasting their pistachio butter (ermagherd!) and I also bought two massive jars of their peanut butter for the cheapest price ever.  I go through a ton of it because I use it to make vegan dog biscuits and it has no additives or preservatives, just peanuts.

A visit with Princess Kathleen from @PestoPincess included a sampling of her new vegan curry bases; butter chicken (no butter, no chicken) and a Cape Malay curry which were both delicious. 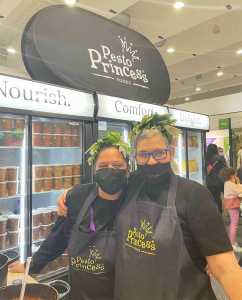 I chatted to UK company reps from Meatless Farm and sampled their pea protein burger which was really good and soon available in our retail stores, and then I was completely amazed at Abstinence where Pierre introduced us to alcohol free spirits. Creepily good.

Nothing feels as lekker for a vegan than this many vegan products all in one place. So, a proper shouting fight with a honey guy was not what I was expecting. But I moved on and will do so here too.

Because then I ate a lovely Buddha bowl from Green Eden and got a free sample of sugar free vegan jelly and soft serve, before getting a bit of brilliant smelly stuff for my headache from Aromatic Apothecary.

Old favourite vegan suppliers like Earthshine, Romeo and Vero, and Yoco, deserved a hello; I am obsessed with their vegan offerings and know them well.

I waddled out of there satisfied but not confident that I had seen, smelled and tried everything. This absolutely has to be a yearly occurrence. Halala The Plant Powered Show.

What: The Plant Powered Show 2022
Where: Cape Town International Convention Centre
When: 27 – 29 May ,10am – 5pm
Web: plantpoweredshow.com
WS

Breakfast at the Conservatory restaurant