After Scott and Kate Johansen (Ferrell and Poehler) lose their daughter Alex’s college fund, they become desperate to earn it back so she can pursue her dream attending university.  With the help of neighbour Frank (Mantzoukas), they decide to start an illegal casino in his house.

Need to make four years’ tuition in one month?

It’s a truth every gambler knows: luck will come and go, and hot streaks turn to ice. In the long run, the only safe bet is with the house.

When Scott and Kate drop their last $500 at a Vegas craps table, they decide they’re tired of being on the losing end. If they can’t beat the house, they need to be the house. “It’s an idea that hit us right away as unique, and combines a lot of the things we love,” says Ferrell, who stars as math-challenged Scott.  Ferrell is also a producer on the film, about a nice couple from the ‘burbs who launch an illicit casino for some quick cash and get insanely carried away. “Whether you sincerely enjoy Vegas or just love to hate it and make fun of it, think about bringing all of that energy and the potential for bad decisions into a small-town setting where people are looking for a reason to cut loose and let their hair down.”

“This is a comedy about family, but it skates the edge,” affirms Poehler, starring as the popcorn-and-movie-night mom turned badass, Kate. “It’s rated R, and we took full advantage of that. There will be blood.”

Scorsese in the suburbs

Extreme situations fall well within the comfort zone of director/producer Andrew Jay Cohen, marking his feature directing debut. Cohen also wrote the script with writer/producer Brendan O’Brien. Citing his inspiration, he says, “To me, it was always ‘Scorsese in the suburbs.’  I’m a big fan of Scorsese and Tarantino movies, but I’m not remotely like any of those characters, so the question is: how would someone like me act under these circumstances?  What would a normal person do if he needed to be muscle, or collect debts, or do some of the other unsavoury things that we assume are part of running an underground casino?  For me, the joke was in watching regular, small-town people trying to be tough guys like they see in the movies.”

Both Cohen and O’Brien come from Scarsdale, NY, which O’Brien characterizes by “manicured lawns and white picket fences,” much like the film’s fictional town of Fox Meadow.  But, he slyly posits, “We were always intrigued by the idea of what might be happening behind closed doors. Maybe people aren’t doing exactly what they should be doing.”

And even if they were, who knows what impulses a little temptation might unleash.

“There are so many stories about ‘What happens in Vegas stays in Vegas,’” O’Brien continues.  “We thought it would be funny to bring Vegas home. We wanted to take average, mild-mannered people with jobs and responsibilities, people who go to city council meetings and meet at the yogurt shop, throw them into a heightened criminal world and see what happens when Vegas is suddenly as close as their buddy’s house down the street.”

The buddy in this case is Frank, the Johansens’ equally broke friend (Mantzoukas).  A marginally reformed gambling addict eager to sell them on this dicey venture, Frank certainly knows the ropes. And his newly foreclosed, nearly vacant, split-level home makes a perfect base of operations. Together, they commit to give it their all, and prepare to reap the rewards of being on the winning side for once in their lives.

What they don’t expect is how becoming overnight crime bosses will liberate them in fantastic and terrifying ways, expose the true personalities of their friends and neighbours, and bust their sleepy little town wide open. 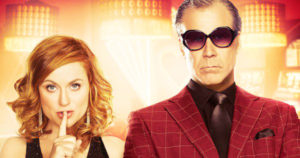 Comedians at the top of their game

The House” celebrates the first time that fellow Saturday Night Live alums Ferrell and Poehler share the big screen as partners, their only other film together being Blades of Glory.  “Their off-the-charts chemistry and comic timing is a gift.  Amazing,” Cohen declares. “You really buy them as a couple,” adds Jessica Elbaum, who served as a producer, along with Adam McKay, for Gary Sanchez Productions. “They’re great together and complement each other brilliantly. They know when to pull it back and when to let it rip. It’s a perfect blend of crazy and funny, but also real, because no matter how far they go, we still need to believe them.”

On a scary note, Jeremy Renner stars as Tommy, a hardcore gangster who gets wind of the underground operation and drops by to meet his competition. Adding more fuel to the fire, The House is populated with a supporting cast of actors and comedians at the top of their game and all nimble improvisers – Rory Scovel, Cedric Yarbrough, Kyle Kinane, Lennon Parham and Andrea Savage as locals looking to satisfy their curiosity, greed and long-simmering rivalries at the city’s newest hot spot. Ferrell adds, “It was a lot of talent to juggle and Andrew did a phenomenal job. Everyone fed off his infectious spirit because he was so enthusiastic and was always coming up with new jokes.”