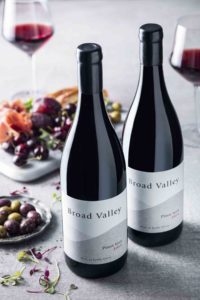 It’s hard not to fall in love with Broad Valley Farm. From the fynbos-clad Klein Rivier Mountains that rise behind it in the south, to the emerald patchwork of pastures and wheat fields that carpet the valley floor to the east and west – it’s a captivating corner of the Overberg. And little wonder David and Leigh Kretzmar snapped up the 105-hectare property when it came on the market in 2009.

But what began as the Kretzmars’ dream of “a simple country plekkie” has blossomed into one of the most exciting new cool-climate vineyards in the Western Cape.

David Kretzmar has long had a love affair with wide open spaces. After a childhood in Kimberley, he spent years farming the dry plains of the Northern Cape. In 1986 he swopped the farm for the city and enrolled in a Masters of Business Administration degree at the University of Cape Town’s Graduate School of Business – the catalyst for a 30-year career in property development. But throughout those years in the city the prospect of a place in the countryside still beckoned.

After searching from Barrydale to Bonnievale to Tulbagh to Napier, the Kretzmars stumbled on Broad Valley. “The farm was completely run-down,” remembers David, who tackled the mammoth project of renovating dilapidated buildings and clearing the property of alien vegetation. While the initial dream was for a simple country getaway, “we soon realised that if we want to look after this land properly we need to make the farm commercially viable, for it to become sustainable” adds David.

After dabbling in the cultivation of French black truffles, and debating the merits of commercial lavender, the couple decided to focus on viticulture. Situated 10 kilometres (as the crow flies) from Walker Bay, its location at the northern end of the Hemel-en-Aarde valley has gifted the farm with the perfect terroir for growing the classic Burgundian cultivars of Pinot Noir and Chardonnay.

“The whole property evolved very organically,” explains Leigh, “We never set out with a grand vision for the farm, but it grew naturally as we cleared the land and made the decision to plant vineyards. And of course, once it started we didn’t want the project to be done half-heartedly.”

Respected viticulturist Kevin Watt was soon brought on board to advise the Kretzmars on the vineyards. After 160 test holes for soil analysis were dug across the property to select the ideal site, Watt guided the process of soil preparation, clonal selection and planting. In 2010 the first 4.6-hectare vineyard of Pinot Noir was planted, followed in 2015 by a further hectare of Pinot Noir alongside a 4.7-hectare block of Chardonnay.

“We didn’t want to be a one-trick-pony, and Chardonnay does extremely well in the nearby Hemel-en-Aarde valley,” explains David, who expects the first Chardonnay harvest in the 2018 vintage.

Smoky, nutmeg aromas on the nose

Planted on north-facing slopes the vineyards share the cool-climate qualities of the nearby Hemel-en-Aarde, with prevailing winds along the valley enhancing the maritime characteristics of the site. Shale and sandstone soils, with clay substrata, add both minerality and complexity to the wines. While grapes from the early harvests were sold off to cellars in both Stellenbosch and Constantia, with the 2014 harvest the Kretzmars decided the time was right to finally put Broad Valley into the bottle.

With the expert input of acclaimed winemaker Kevin Grant, a member of the Cape Winemakers’ Guild, the grapes for the first Broad Valley wines were handpicked in the cool of the night and vinified at a nearby cellar. After 11 months of barrel maturation, the maiden vintage from a farm reborn was finally in the bottle.

While the firm acidity of 2014 imbues the wine with a pleasingly austere character, there has been a notable progression through the vintages as both the vineyards and winemaking philosophy evolve. With smoky, nutmeg aromas on the nose, the 2015 vintage brings deeper fruit and sought-after ripeness. Flavours of black cherry and cassis marry with a savoury foundation, while bright acidity ensures freshness on the palate.

With the end-goal of capturing an authentic expression of fruit and terroir, even these early vintages provide a superb New World expression of a Burgundian-style Pinot Noir. With the wines enjoying plenty of positive reviews at the recent London Wine Fair, “we haven’t had any heartache from the heartbreak grape yet,” laughs David. 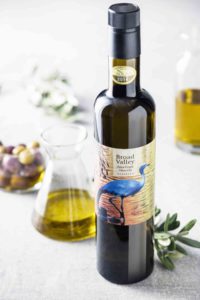 While the vineyards take pride of place on the upper slopes of the farm, on the plains below the original homestead the family has also planted five hectares of olive orchards to produce the unique Broad Valley Extra Virgin Olive Oil.

Planted with a blend of FS17, Frantoio and Coratina cultivars to ensure complexity in the oil, the groves are hand-harvested and cold-pressed on-site in a modern Oliomio press. After pressing, the oil is settled overnight before filtering, blending and bottling. The careful blending of cultivars ensures a medium-bodied Extra Virgin olive oil with an appealing palate of olive leaf, pine seed and lingering pepper.

While the oil is delicious, equally memorable is the striking packaging that pays homage to the endangered Blue Crane, a regular visitor to the farm and an unmistakeable icon of the Overberg region.