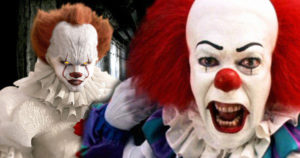 Creepy and yet emotionally resonant, It is a disturbing reboot of a scary ’80s film character.

Based on a Stephen King book which has already received the film treatment, this film borrows a heavily from Steven Spielberg movies of yore, and not just because it is set in that decade. It’s a small town suburb with a menace lurking beneath, a darkness that only the children see – for that matter, neglected children who ride their bikes through a town of oblivious adults.

Buckets of blood and scary moments!

It contains buckets of blood and quite a few grossly scary moments, but like what he did with Mama, director Andy Muschietti spends a lot of time building up an ominous atmosphere. The creepy clown lurks on the edges of your vision, not only on the big screen but literally hiding in photographs.

The story starts as young Bill (Jaeden Lieberher) makes a paper boat for his little brother Georgie (Jackson Robert Scott) who wants to go out and play in the rain.

From the moment the cute little one psyches himself up to enter the basement for  the necessary supplies we know something bad is going to happen, and we are not disappointed.

The film then skips forward a few months as summer sets the town’s children loose and Bill and his friends have to get creative about avoiding the school bullies. They make new friends and learn the value of sticking together.

The film is also part psychological thriller. While we stayed away from sewers as kids because the creepy clown had crept into suburban myth, we have forgotten that the point of the original book and film was that IT was our fears personified.

So, now we are reminded how each teen in this film responds to what scares them the most, and the audience flinches along with each one in nervous sympathy.

A fine bunch of actors

Setting up each character takes a while, and each of the children have an emotive story that carries the narrative forward. So, the scary parts are very frightening indeed, but not the crux of the matter. The little ensemble features a fine bunch of actors and it will be fun to see who gets cast as their adult versions in Chapter 2.

Bill Skarsgard is completely unrecognisable as Pennywise the clown and the few hints we see about his origin will probably be explored more fully in the sequel, and yes, there will be one because this story is not finished.

Fans of the book will miss some of the deeper aspects of characterisation while those familiar with Tim Curry as the clown in the TV series make their own comparisons, but if you are unfamiliar with either this film is really going to scare you.