Jumanji: Welcome to the Jungle is a fun family adventure that is surprisingly better than expected.

Ignoring the Zathura: A Space Adventure sequel that never should have been, this latest Jumanji film is set two decades after Robin Williams first ran through the jungle. It is not a reboot or remake, but a sequel to the original and the reference to Williams’ character will bring a lump to your throat.

Sucked into the Jumanji game

It works on two levels – those of us who were board game playing teenagers back then will love the nostalgic notes, while kids of today will totally get the RPG references.

The film is centred on the actions of four teenagers who discover the Jumanji game when they’re supposed to be cleaning up a storeroom as detention punishment.

We hear the drums beat in the distance, the kids get sucked into the game and video game mayhem ensues. 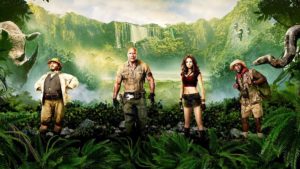 Each of the teenagers embodies an avatar for the most part of the film, a bit of who the young characters are comes through in the way each actor reacts to their new circumstances.

Spencer is the game playing geek who is the first to wrap his mind around what is happening and he becomes the de facto leader, not least because his avatar Dr Smolder Bravestone (Johnson) is biggest and strongest. Bravestone is an explorer with a devastating power – smouldering intensity. And oh boy, does he smoulder.

Jack Black is great as Bethany, a self-absorbed teenage girl who suddenly finds herself stuck in the body of an overweight man – she picked the avatar because the name was Shelly. Director Jake Kasdan manages to keep Black on track and just on this side of his tendency to go over the top, so it works.

Shy Martha suddenly finds herself inhabiting the avatar Ruby Roundhouse (Gillan) who, it turns out, is quite the fighter.

Kevin Hart is zoologist Moose Finbar, but Fridge does not like the fact now he is suddenly sidekick to Bravestone because back in the real world he is a sports jock who lives up to his name – and being the small guy does not sit well with him.

The four realise they have to work together and well, you can tell where this is going if you have watched any Disney adventure or have picked up anything about role playing video games.

It is predictable, undemanding fare, but the one-liners make up for a lot and it is something the family can appreciate together.