When Marguerite Robinson commissioned Lara Foot to write a piece for the Aardklop Festival in 2007, I wonder if she had any idea that the production that she selected from Foot’s submissions would still be touching hearts and winning awards ten years later. 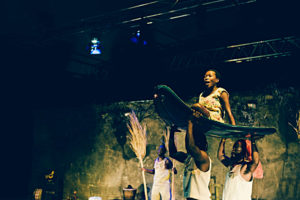 Karoo Moose (pictured left), originally written as a film script No Fathers, by Foot won three awards at the Kanna Awards last night. Foot, for her role as director, Chuma Soptela as best actress and the production as the Best Theatre Production at the 2017 festival. Sadly a decade later the relevance of the powerful Karoo Moose is as pertinent as ever. The names of young girls raped and murdered in the Western Cape have become a regular feature in news broadcasts. The play, which follows the journey of one young girl, betrayed by those closest to her, explores the possibility of communities taking responsibility and ultimately providing redemption. There are a handful of performances this week as part of the ASSITEJ festival and I urge you to watch this iconic piece of South African theatre if you haven’t yet done so. Later this year it heads to the Edinburgh Festival. 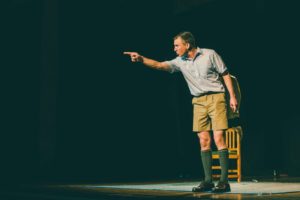 In another intense and riveting production, Gideon Lombard was recognized as the Best Actor for his role in Die Reuk van Appels (pictured right). The stage adaptation of Mark Behr’s book also published in English as The Smell Of Apples was simply astonishing. Directed by Lara Bye, who gave the young actor “a square of astroturf” to discover, reveal and ultimately redeem the life of a young boy, the coming of age story held audiences spellbound. Set in South Africa in the late ‘80s the nexus of political and private violence is a story that still bears telling. The producers of the play, Theatre Rocket were also recipients of an award sponsored by Lumico for their engaging marketing campaign during the festival.

As Kopane Maroga took to the stage to receive his award for Best Supporting Actress he praised the “melanin magic” being celebrated. A sentiment reinforced by Buhle Ngaba who stressed the importance of telling the stories of young black women on stage. 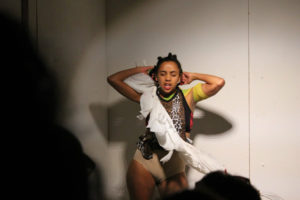 She won two awards, for Best Upcoming Artist and her production Swan Song (pictured left) was the Best Production at the Uitkamp Teater.

Last year the Uitkamp Teater was acknowledged for its innovative contribution and in 2017 it was no different. A variety of productions from a heartbreaking tale written and performed with exquisite tenderness by Igna Botha in Sandra Se Laaste Show, the eclectic, crazy, clowning duo of Klara van Wyk and Jazzara Jaslyn in Tweespalt and the politically incorrect and outrageously relevant Des-Lee McKenzie in Ir(ras)sioneel were just three of the productions available at the princely sum of R20 a ticket. For many theatregoers a day spent at the UitkampTeater was the highlight of the festival and the additional Kanna presented for the Best Production on this platform was a recognition of the utter joy that they brought to audiences.

Strides made in theatre 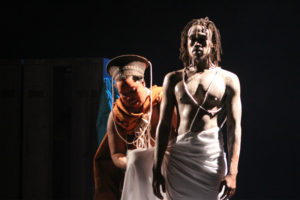 Rhodѐ Snyman, the CEO of Kunste Onbeperk commented on the strides that the festival has made in recent years. That is in no small part to her contribution and the KKNK is fast becoming a platform where South African theatre, regardless of language is celebrated. Hugo Theart, in his role as Artistic Director continues to engage with innovative and exciting ways to broaden the reach of the festival to both audiences and artists. Neil Coppen acknowledged the immense support given to Buiteland (pictured right) which won the award for the Best Debut Production. He was particularly appreciative of being allowed to “just get on and make the work” as he put it and the play exploring sexuality, identity and spiritual beliefs was definitely a highlight of the festival.

The standard of scripts at the festival this year was of such a high calibre that an additional Kanna was presented for the Best New Script. The utterly brilliant Dop (pictured below) written by Retief Scholtz, featuring Andrѐ Odendaal and Wilhelm van der Walt was a theatre gem. Directed by Sylvaine Strike the tale of two men, each caught in their own personal dilemmas presented a rare look at men with rich emotional lives. Deadly serious and outrageously funny, the writing was exceptional. 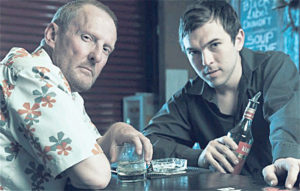 Mareli Stolp, the convenor of the panel, commented on the high standard of work presented at the 2017 festival and the vibrant health of the arts sector as showcased at the festival. A new feature of the Kannas this year was the inclusion of children’s theatre and the judging of the prize and the presentation thereof was by children. The young panel were treated to a feast of children’s theatre and their very discerning choice of In die Woud was met with resounding applause.

Each winner received an artwork designed and created by Danѐlle Janse van Rensburg and a cash prize sponsored by various corporate sponsors. Art lovers will already have the festival scheduled in their calendar for 2018. If it isn’t in yours yet, make sure that on 29 March 2018 you are headed towards Oudtshoorn for a feast of theatre, music and art, and perhaps a roosterkoek or two.

Kanna for the best  Uitkamp Theatre production, sponsored by NATi