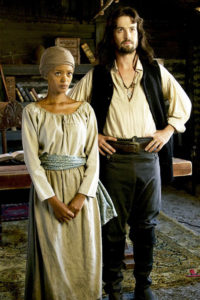 This story of Krotoa, the niece of Autshumao (Herrie die Strandloper to anyone who read the Standard 2 history texbook pre-1994) has garnered awards on the international film festival circuit, but local social media has not been as kind.

Set in Cape Town back when it was truly but a way station, before the Castle of Good Hope was even built, the film is not a documentary retelling of things as they happened.

After all, not much is really known about Krotoa, renamed Eva and adopted into Jan van Riebeeck’s (Armand Aucamp’s) household and raised to become an interpreter, translator, trading agent and peace negotiator for the Dutch.

Instead, it is a dramatic representation of how writers Margaret Goldsmid and Kaye Williams thought things could have played out and how director Roberta Durrant (the Felix film and TV series Home Affairs count as her most recent work) interprets that written instruction.

The film is handsomely appointed, with spot-on colour grading and a pin-sharp soundscape that belies the countless problems the wind must have created on the mostly outdoor sets.

As she did in Oliver Hermanus’ Forgotten River Crystal-Donna Roberts gives a quietly intense and committed performance as the lead female character, but the script she is given to work with does not give her much chance for nuance.

Eleven-year-old Charis Williams is feisty and cutely stubborn as child Krotoa, but Roberts gets the bulk of the screen time. While she (literally) runs between her people, the Goringhaicona, and the Dutch, preaching a middle way, her uncle and clan leaders are painted as ineffectual, weak and servile.

Armand Aucamp cuts a dashing figure as Van Riebeeck, who is made out to be some sort of roguish, charming frontiersman who thinks this little girl is very clever indeed. Then he proceeds to rape the clever girl and feel rather bad about it.

The way Krotoa then gets slut-shamed by her people makes no sense.

Also, don’t get me started on the way she gets treated once she is married to Danish surgeon Pieter van Meerhof (Bessenger in a rather unfortunate wig). It doesn’t make sense within the historical context of the time, since attitudes towards inter-racial marriages only hardened in a negative way in the next century as a manifestation of internal developments within respective colonial contexts.

The big question is really who is this film’s audience? The words which run over the last scene are the clue. 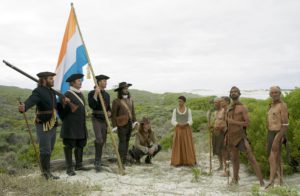 A clash of cultures

The audience is reminded that Krotoa is the ancestress of many a famous white South African. So what if her three children were the first Coloureds born at the Cape? That’s apparently besides the point.

This is about salving some liberal conscience to be able to sigh over the noble savage and her attempts to find a middle way in a clash of cultures. But make no mistake, the culture Krotoa was born into is not portrayed as anything other than other.

The film does very inadvertently show how white South African culture takes what it wants from Coloured culture and refuses to acknowledge that we have the right to self-determination as a people in our own right, and not as a mistake of miscegenation that happened despite the rules.