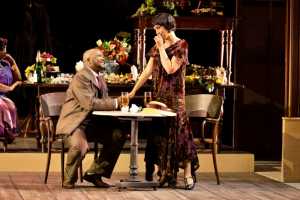 Cape Town Opera’s current production of this inexplicably underrated work by Puccini epitomises the triumph of tight collaboration between creative team and cast.

Director Crouse, conductor Kernelle, designers Mitchell and Bardien, and costumers Davids and Visagie have combined their several skills to enhance a committed performance from singers, with eye-pleasing choreography from de Moyencourt. All of which adds up to an evening of richly rewarding opera.

Originally set in the latter half of the 19th century, La rondine has here been updated to the 1920s, an appropriate decision in view of the spirit animating that age as, newly emerged from the trauma of WW1, young men and women obsessively pursued ephemeral pleasures in a world where nothing was guaranteed to last. “Carpe diem” appeared to be the motive force behind that febrile gaiety…

Like La bohème, La rondine’s action is anchored in Paris (despite an excursion into the fashionable South of France in Act 3), both the City of Light and the French Riviera having the potential to gratify cravings for self-indulgent luxury. Each act is prefaced by an evocative screen referencing its content: the underside of the Eiffel Tower, a postcard from Provence, and, between them, an emblematic statement by Gertrude Stein that “A rose is a rose is a rose”, key to understanding the dénouement of the plot. 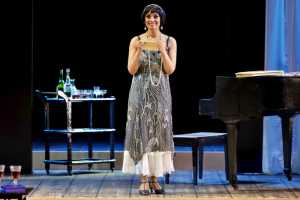 Truth to one’s own self and identity – the inexorable bar to any happiness sought in the wrong place or with the wrong person – is ultimately what divides the lovers and denies them a chance of lasting love and a shared life.

Unlike the separation of La bohème’s protagonists forever parted by death, that of La rondine’s fundamentally incompatible leads is depressing as opposed to tragic. The sprightly music, lyrical arias, joie de vivre and luminous elegance of La rondine mitigate any sense of ineluctable doom. Nothing lasts anyway in this fragile, transient world, so after some tears life goes on. Therein lies the bittersweet quality, and deep truth, of this Puccini opera.

Director Crouse has approached it in a spirit of lucid compassion laced with gentle irony to make the leads both sympathetic and plausible. Vocal proficiency apart, their intelligently piloted interpretation is a significant factor in the success of this production.

Brittany Smith as Magda proves that her artistic stature is increasing with every appearance on the opera stage. After a strident start on opening night she soon settled into the requisite delivery, balancing power and sweetness with aplomb. Her co-lead Lukhanyo Moyake (Ruggero) could hardly be more engaging in his projection of youthful, bright-eyed zest for love and life; his finest moment, apart from heart-melting duets with Smith, has to be his radiant rendition of the aria “Parigi”, a highlight of La Rondine. 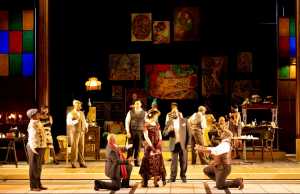 Among secondary personae, a feisty portrayal of the maid Lisette from Jodie Khan and the resonant authority of Lwazi Dlamini’s Rambaldo add to the lustre of CTO’s beguiling production. Siphesihle Mdena gleams with sophistication as the poet Prunier, his vocal control impressive.

More than worthy of frequent staging

The quality of accompaniment from the CTPO under Kernelle’s baton is no doubt due in some measure to direction from a conductor who as a chorus master thoroughly understands what is required from musicians to support vocal performance to optimum effect.

We progress from one exquisitely devised set to the next, each replete with attention to detail; gradually glamour, elegance, bohemian frivolity and exuberance with a leitmotif of roses provide a subtext to the plot: a wry comment on the illusion of happiness and love everlasting.

La rondine is a work more than worthy of frequent staging, especially when it is as well served as this.